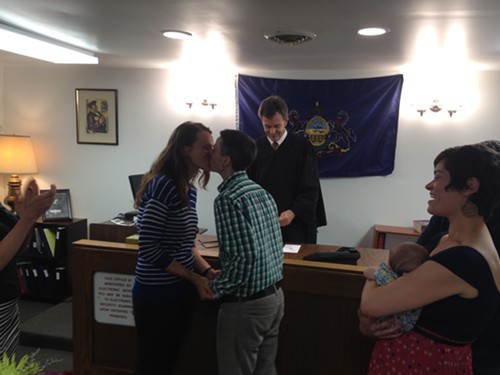 
On the six-month anniversary of same-sex marriage legalization in Pennsylvania, District Judge Hugh McGough will announce his candidacy for Common Pleas Court Judge. On May 21, McGough performed the first same-sex marriage in Allegheny County.

The full release is below:


Pittsburgh, PA (November 12, 2014) - The judge who performed Pennsylvania’s first same-sex wedding nearly six months ago — on the day after a federal court struck down Pennsylvania’s ban on same-sex nuptials — is set to announce his candidacy for Judge of the Allegheny County Court of Common Pleas.

In what may be a crowded field of judicial candidates seeking to capture the nomination for one of at least two Common Pleas vacancies to be filled in 2015, McGough appears to be the only candidate currently serving as a judge. The Judiciary Committee of the Allegheny County Bar Association gave Judge McGough its highest rating — “highly recommended” — for service on the Court of Common Pleas.

Judge McGough divides his service between Pittsburgh City Court and a neighborhood courtroom in the East End, and has a docket heavy with criminal, landlord-tenant and truancy cases. Regardless of the type of case, he said there are some recurring culprits: “My time on the bench has taught me that illegal drugs and guns, joblessness and poverty, mental illness and family dysfunction are factors in so many cases. I believe my experience as a pro bono attorney, my work ethic and sense of compassion have helped me to be fair and effective on the bench.”

Judge McGough's campaign kick-off is at the Pittsburgh Center for the Arts, 6300 Fifth Avenue, from 5:30 — 7:30 on Thursday, November 20, which is the 6-month anniversary of the federal court ruling that brought “marriage equality” to Pennsylvania.