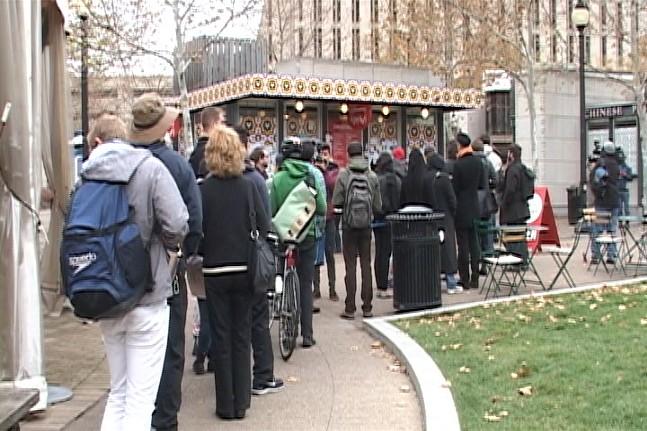 
Despite media cameras, reporters buzzing about, and a long line for service, Calvin Pollak sat at a table in Schenley Plaza over a steaming bowl of Conflict Kitchen’s Maftoul — a Palestinian dish of couscous and slow-cooked chicken and chick peas. The restaurant reopened today after closing because of death threats it received on Saturday over negative perceptions over its Palestinian theme.

“I think what [Conflict Kitchen does] is amazing in giving a voice to victims of conflicts who are typically silenced,” Pollak says.

Pollak, who is of Jewish heritage, came out to support the reopening of the restaurant. The restaurant has received criticism for being "anti-Israeli" and anti-Semitic.

“I think it’s anti-Semitic to believe that all Jewish people must support everything that the state of Israel does. Jews are just as diverse as any other cultural group,” Pollak says.

Conflict Kitchen, an art project run by Carnegie Mellon University, serves food from countries with which the United States is in conflict. Past menus have included food from Afghanistan, Cuba, North Korea and Venezuela.

Media coverage of the latest menu offerings blew up with Fox News touting the headline “Anti-Israeli restaurant receives funding from John Kerry’s wife’s foundation,” on Oct. 24, referring to the Heinz Endowments, which granted the project money when it relocated to Oakland. Heinz Endowments has since issued a statement distancing itself from the restaurant.

After the restaurant received death threats, the story became global, with even coverage by The Guardian and Al Jazeera.

“The way the organization’s mission has been covered by local media, particularly the Post-Gazette, has been irresponsible,” Pollak said.

Much of the media attention and conversation has focused on a folded informational flyer (also used as a wrapper for to-go orders) that Conflict Kitchen issues with each new menu change. The flyer includes anecdotes – regarding cultural traditions such as dating and marriage, religion in daily life, food and issues with government and conflict – from people living in the respective countries.

“The interviews that come with our food are central to the project,” says Dawn Weleski, co-director of Conflict Kitchen. “This project is about highlighting the Palestinian narrative, about everyday life in Palestine the culture the culinary culture more specifically, and then basically what it’s like to live in Palestine, what it’s like for a Palestinian-American to live in Pittsburgh.”

Some quotes on the flyer read “It’s a Bedouin tradition to serve tea and coffee to guests,” while others read “Water, land and government services are taken away from Palestinians and given to Jewish settlers… They are creating a refugee problem. Israel knows this. They intend for the settlers to never leave.”

“Those quotes have to be taken in the context of the conflict that’s occurring and often the people that are saying things about their experience are traumatized by the events that are happening ,” Palestinian-American Omar Abuhejleh, owner of Allegro Hearth Bakery in Squirrel Hill and public-interest attorney. “You can expect to have some pretty visceral reaction and the problem often is that people look at those visceral reactions and rather than engaging them and talking about them, they want to silence hem because they disagree with them.”

Abuhejleh spoke at a public event hosted by Conflict Kitchen in October where Maryland-based Laila El-Haddad, Palestinian blogger and co-author of The Gaza Kitchen: A Palestinian Culinary Journey, also spoke.

“It was really nothing more than Palestinians speaking about their lives, and that’s the point,” El-Hadded said in a phone interview. “It’s not supposed to be something edited or politically corrected or whatever.”

El-Haddad wrote about her experience in Pittsburgh and being interviewed by Pittsburgh media while visiting as well as the Conflict Kitchen controversy in a blog post published today.

Conflict Kitchen says it has no plans to change its menu and will continue serving it until mid-March as originally planned.