Three performances remain of this effective staging of Shakespeare’s tragedy, whose supernatural doings complement its gore-filled portrait of ambition gone off the rails. 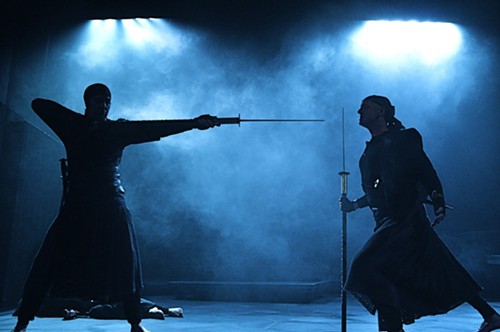 It’s also among Shakespeare’s most streamlined and straightforward plays, with a couple famous soliliquies (“Tomorrow and tomorrow and tomorrow”) and plenty of examples of his additions to the English language, including might be the earliest recorded knock-knock jokes.

The production, directed by PICT's Alan Stanford, looks great, too. Costume-designer Michael Montgomery has everyone wearing headscarves (a la motorcyclists), which has a curious visual leveling effect (because you can’t see anyone’s hair). Notable too are the movement styles for the three witches — floating weightlessly on their toes — and witch goddess Hecate (played by Karen Baum), who creeps around like a spider. (The choreographer is Mark Conway Thompson.)

The remaining shows are at 8 p.m. tonight and tomorrow, and the 2 p.m. Saturday matinee. Macbeth is staged in the appropriately classic confines of the Charity Randall Theatre, inside Oakland’s Stephen Foster Memorial, at 4301 Forbes Ave.

The Seventh Stop of October 2014: An account of one night of King Diamond’s North American Tour