A conversation with Boaz: Extended version

In this week's issue, I ran a short version of my chat the other day with Larimer-born rapper Boaz, who releases Intuition, his Rostrum Records debut, next week. Our talk was too good not to share, so here's the long version for you — Boaz's release events are a listening party Friday evening at Daily Bread in Garfield and a performance Saturday night (Oct. 18) at Club Ivy in the Strip. 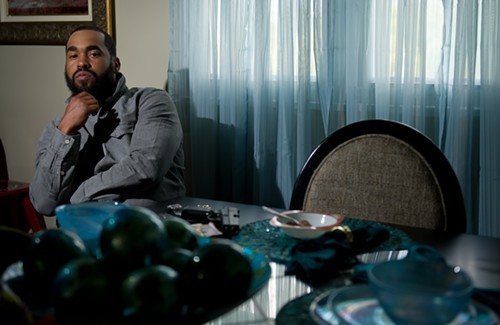 There’s been talk for a while of you hooking up with Rostrum, but this is your first record with the label, right?
I released the last album on my own, me and my man DJ Shef, through Point Blank Productions. This is my official Rostrum Records debut. We’d been working on the album, trying to make it the biggest independent album at the point of release. It’s been taking so long because we’ve been putting so much into it: It’s been done three times over already.

How does being with this label change things?
I think it’s a good move for both of us. It’s a very organic label, we’re from the same city, and right now we’ve just got a good grip on the scene of hip hop. Being in a position to get my music into places it hasn’t been heard before. It feels like I’m being reintroduced to the game in a whole new manner.

Some people in the hip-hop scene locally felt really hopeful when Wiz and then Mac blew up, then felt a lull — do you think is a chance for Pittsburgh to re-emerge nationally with somebody new?
Most certainly. I think we’ve always had that international feel to us. Being from Pittsburgh, we just had to realize we were hip hop. It doesn’t have that much of a pulse outside of what we do. The louder our voices become, the bigger the spotlight has been nationally. I think it’s all about timing, and knowing what you really want. I think people get misconstrued with superstardom — I think that was the big misconception with Wiz’s success. Everybody smelled success, and they forgot this kid had worked his ass off. It takes a lot of hard work and consistency, and solidifying yourself as an artist if this is something you wanna do as a career.

People in other cities might think of those guys as the face of Pittsburgh hip hop — what do you think they’ll see in you? What sets you apart?
I think it doesn’t put them in a particular place; it just solidifies our city in terms of its versatility of culture. What they portray for the city is quite different than what I’m giving you. It’s just a real solidification of that urban scene, hip hop at its core, its essence. It’s a good look for them, because it shows you they’ve put that spotlight on the city, for people to look into it. It’s a big look, for all of us.

Some artists break when they’re young and just starting out; you’ve been at it for almost a decade now. How does that affect you as an artist?
It’s funny: I’ve been doing this for a decade or so, but just as of recently have I been working hard. Focusing, telling myself what I wanted to do. For some time, it was more of a hobby than a career; it was just something we’d done to pass the time. Until fans and people in the city starting telling me I had to believe in myself a little more, “You’re pretty talented.” It’s really hit home to me how hard you have to work to be a successful artist in this industry. It’s just been a learning experience.

That’s a theme of the first track of the new album — getting your life together and getting serious about your career. Did that idea resonate throughout?
Yeah, definitely. It was like the next level of my career — just telling me to solidify myself in what I want to do. It takes more than you think, when you’re trying to make an album that sounds original and just as good as everything else right now. It makes me feel good to be able to have such a good album. And coming from Pittsburgh, I think we undermine what it means for the city; I hope the other artists around are more so inspired than discouraged by the success that I’m having right now, because it can be good for everybody.

What’s day-to-day life like right now? Are you in Pittsburgh most of the time, or traveling a lot?
Half and half, between Pittsburgh and everywhere else. My life is good: I wake up, I feel blessed day in and day out, I write hella music, I’m a very chill cat, I lean back, I disappear into the weed smoke somewhere, and I just do what I do. I treat other people how I want to be treated. Day-to-day life, it has its different experiences — I haven’t programmed for it to work the same every day. Every day is a new journey, a new excitement.

You have Mac Miller on a track on this new album, Jadakiss is on there — why did you go with the people you did for guest spots?
It’s kinda crazy: The song I’ve got with Jadakiss, I’ve also got Styles P on, and those guys are two of my favorite artists. It’s a humbling feeling to be with guys who have inspired me. And for them to accept you as a constituent and an equal, it’s like, “You’ve got the potential to be the next us, if you keep doing what you do.” So that was a really fulfilling moment in my career, to be with those cats. And working with Mac, it’s always such a pleasure: We’re both from the same city, and we’ve seen each other’s growth. We’ll be supporting each other, like it’s still that organic. It’s just fun; stuff just comes out. It’s always cool when I’m with Mac. I also got to work with the legendary Junior Reid, a dancehall legend. I got to go to Kingston and shoot the video with him, and do some things that are unusual to a hip-hop artist, I guess. The whole experience of recording the album was so organic. We didn’t try too hard to do anything; everybody worked with us willingly. And as you see, I kept the features low, so it’s a lot of me on there.

What are your plans now that the album’s coming up — what do you have on tap for the next couple of months, and where do you see yourself in a year or two?
I think, in a year or two, hopefully I’ve got my second album out. And with an album — you see the lifespan you gave it? You gave it a two-month lifespan. That’s classic. We want people listening to this stuff well into 2015. It takes work and an ill strategy, and having fun with the album. Doing shit differently to stay marketable. We’re gonna have fun over the next two months, and line up a tour — hopefully get a headlining joint, and if not I’m pretty sure one of my hip-hop buddies will throw me on a tour. So it should just be a fun next few months. In front of the cameras everywhere, radio stations everywhere, just making sure the whole world, as far as we can reach, gets to hear the music.