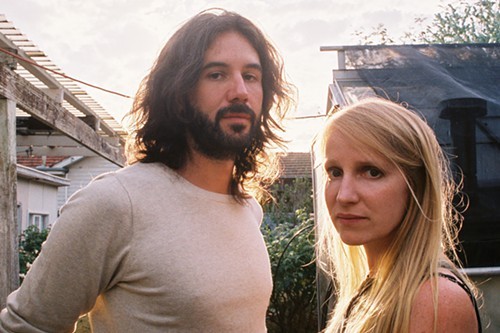 For Australian duo Luluc, the harmonies and juxtaposition of disparate elements exhibited on Passerby, the band's second album and international debut, are a reflection of the circumstances that brought the pair to their current state. On the album, vocalist Zoë Randell's throaty, haunted vocals belie a confidence, that is augmented, not undermined, by the vulnerability of their delicate instrumentation. In its quiet, matter-of-fact recollection of bygone loves, friendships, and adventures, Passerby offers an increasingly rare vision in the indie-folk arena; heartfelt sentiment, free of maudlin preciousness.

Though Randell and Steve Hassett, who rounds out the duo, would have succeeded on their own merit, they had the great fortune of receiving support from artists whose own work informed the work of Luluc. Aaron Dessner of the National, supporters of Luluc's first outing, even shows up on Passerby, sharing a Co-Producer credit with Luluc. In a way, Luluc's path to date lends credence to the question asked by aspiring musicians everywhere: What does the message matter if it isn't reaching the right people? Still, the validation is hard-won and Luluc are not about to squander it, nor will they let it intrude upon their creative trajectory. In the following conversation, Randell discusses maintaining the sensibilities and approach that brought Luluc their acclaim and finding fans in their creative heroes. Luluc will open for J Mascis on October 15 at Club Cafe.

Luluc's first album, Dear Hamlyn, and your recent album, Passerby, are both very reflective. It's been my impression that first albums tend to be that way because the artist is creating to facilitate the formation of an identity. As your creative life gains momentum, do you struggle to maintain that reflective quality.

Not so far, which is good. I've heard a lot of writers - not so much songwriters, but book writers and television writers - talk about how childhood and those early years are a great source of material and inspiration. I think because your imagination is so young and fresh. Your impressions of life form [there] and then you reflect and develop and change. as long as I'm developing and not getting too stagnant in my own thinking, then I should be able to maintain a reflective approach to my work over time until I'm an old bird.

As you become more accepted as a songwriter do you find yourself identifying more with the role of songwriter or have you always considered that to be your role?

I've never really taken on that idea very formally in my head and I still don't. I think that's because my approach to songwriting is very intuitive and I want to protect that (approach), (so) I try not to think about myself in those terms. At the same time, I definitely have a sense of vocation and a sense of dedication to what I do. I suppose I keep my thinking around that much more involved in how I keep the project interesting to me and alive.

Do you find yourself experiencing things through the lens of a songwriter, or do you try to keep the experience of your day-to-day life separate?

Your first album, Dear Hamlyn, afforded you a number of high-profile fans, who were vocal about their support of Luluc. What is it like as a songwriter in a band that is relatively early in their career to learn that you have fan in someone like well known record producer Joe Boyd or in members of the National?

[laughs] It's pretty fantastic. It doesn't get much better, I guess. I'm a huge fan of Nick Drake's records and we were familiar with Joe Boyd because of Nick Drake and Pink Floyd. A friend suggested that we send him our record, which is part of how we ended up hooking up with him, but we did read Joe Boyd's book (white bicycles: making music in the 1960s) before we sent it. We were quite reluctant to send it because he's Joe Boyd. [We figured] he doesn't really listen to a lot of CD's because he gets so many. We sort of thought he would never hear it even if we did send it to him. In that book, Joe talks about all the different musicians and things he's been involved with over the course of his life in music and it's quite incredible. To come under that umbrella of music he's taken note of is just a huge compliment and a little bit hard to believe, I guess [laughs]. You're just sort of like 'Oh, really? Well, that's nice!' You don't really think about yourself in those terms. It's lovely.

With the National, we loved their records. Sometimes when you hear peoples' music you have a sense that you might resonate with those people. i remember when I first heard the National I felt like I understood what they were doing and I felt like they would probably understand us pretty well, too. After however many years we met and that was very much the case. They understood our music and where we were coming from and the intent. They all just felt like old friends, straightaway, which is always a lovely feeling.

As a fan of Nick Drake and as a fan of the National, do you consider acclaim from the likes of Joe Boyd or the National as a bonus, or do you see it as an indicator that you are on the right track?

A bit of both. It's wonderful to have acceptance by your peers because they're the people doing the same thing as you. They're creative as well and if they acknowledge your work or think that it has something to offer, that's fantastic. Also, there is a sense that, since creative work is so challenging, you hope that you're communicating what you're trying to and that you're making something worthwhile. Having people resonate with it and acknowledge it, especially the people who have made music that you love, can definitely give you a sense of validation, like you've hit the mark you were aiming for.