Suppressed opinions, books that have been pulled from library shelves, and more will be celebrated at this free annual ACLU of Pennsylvania Greater Pittsburgh Chapter event. 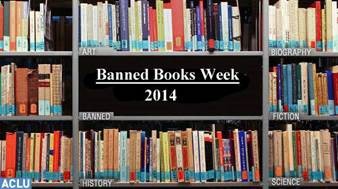 Guggenheimer will read from Huckleberry Finn, perenially controversial in schools for its period-appropriate use of “nigger.” Comedian Olifson will read from Kurt Vonnegut’s essay “Cold Turkey.” Kamin — the world-renowned, Pittsburgh-based performer and Charlie Chaplin expert who tutored both Robert Downey Jr. and Johnny Depp for Chaplin-related film roles — will perform a tribute to Chaplin, whose political opinions were often controversial in his own time.

German, known for her spoken-word work, will read from four songs by the Dixie Chicks, whose on-stage criticism of President George W. Bush during the run-up to the invasion of Iraq famously got them banned from country radio. (The songs selected include “Goodbye Earl and “Not Ready to Make Nice.”)

Other readers include “library ladies” Ginny Beck and Maggie McFalls. And students from the Hope Academy of Music and the Arts will perform John Lennon’s “Imagine” and CSNY’s “Ohio.”

The event, cosponsored by WESA 90.5 and the Carnegie Library of Pittsburgh, also features video of banned print and television ads.