ToonSeum Head, Founder Draws Self Out of the Picture | Blogh

The ToonSeum has its work cut out for it to replace founder and founding director Joe Wos. 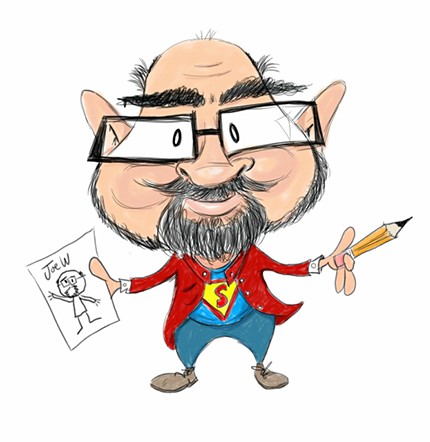 Wos launched this museum of cartoon art seven years ago, in a hallway in the Children’s Museum of Pittsburgh, then grew it into its own double storefront Downtown. Yesterday, he announced he was leaving the locally unique cultural attraction to give him more time to do actual cartooning. His last day will be Sept. 30.

“You reach a point in your life where you just realize it’s time to move on,” says Wos. “It’s a return to what I really love doing.” He added that he has three kids, the oldest age 13, all rapidly approached college age.

The ToonSeum will remain open under yet-to-be announced interim leadership while its board searches for a new director, said board president Rob Rogers. Exhibits at the space on Liberty Avenue are booked through the end of 2015, Rogers said.

But Rogers acknowledged that it won’t be possible to “replace” Wos per se: The puckish cartoonist is one of a kind. "He had phenomenal energy, creativity and vision,” says Rogers, himself the editorial cartoonist at the Pittsburgh Post-Gazette. “He was always coming up with some really great stuff ... He really brought that place to life.”

“He was brilliant at getting the buzz" for the museum, Rogers adds.

Indeed, Wos has occasionally sparked controversy, for himself if not the museum: Last year, he drew the ire of the Pittsburgh Cultural Trust when he started selling T-shirts bearing the image of the giant rubber duck that was the symbol of the Trust’s International Festival of Firsts. That was Wos’ personal project, not a ToonSeum initiative, though the squabble ended when Wos agreed that proceeds from T-shirt sales would benefit the ToonSeum.

Wos, who lives with his family in Penn Hills, said running the ToonSeum has been “very fulfilling work.” But it’s also been mostly a volunteer job.

Wos says that for years he’s worked at the Liberty Avenue venue from 7 a.m.-3 p.m. daily, then gone home and often worked until 3 a.m. on ToonSeum business. He never got a salary until earlier this year.

Rogers notes the board had offered to pay Wos earlier. But, he says, Wos "felt it was more important to get the thing up and running" and to hire support staff first. Rogers says that the board replaced a full-time manager position with two part-timers to afford Wos’ annual salary of $24,000.

Thanks largely to Wos, the ToonSeum was a lively addition to the Downtown art scene. In those seven years, the ToonSeum staged 75 shows, Wos says. Some were lighthearted, like a current show about superheros. Others were more challenging.

Asked to name some highlights, Wos noted Drawn in Black and White, a history of African-American cartoonists and Too Soon, which addressed the Sept. 11, 2001, terrorist attacks. An exhibit on the history of animation traveled to other cities, he says.

The ToonSeum even staged the first-ever showcase honoring the National Cartoonists Society’s Cartoonist of the Year award. That coincided with the group’s convention coming to town for the first time, thanks largely to Wos himself.

Outside of regular hours, the ToonSeum also hosted film screenings, burlesque life-drawing and other events. “My goal is always to help create a community,” says Wos.

Rogers says Wos did so. “He really created a space for cartoonists and comics artists and animators,” says Rogers. “He helped bring the community together. He created an energy around cartooning and comics that wasn't there before.”

Rogers said the museum, with a budget of about $200,000, doesn’t have the wherewithal to hire a full-time director at a competitive salary. "It's not an option yet,” says Rogers. "I think that'll be down the road." He said the ToonSeum needs to work on securing more foundation support.

Wos, in fact, has been outspoken about the museum’s difficulties getting funding from foundations used to supporting more traditional “high art” forms. He chafes at the lack of regard for cartooning in the U.S., where the ToonSeum is one of only a handful of museums celebrating the form.

But for his part, Wos is looking forward to doing more work for Highlights magazine and to pursuing more cartooning for corporate clients — work he’s already done for Starkist and locally based DDI.

He’s also working to finish his kids’ book The Three Little Pigsburghers, a Pittsburghese take on the classic fairy tale. And he’d like to begin work on another book, probably involving mazes — though probably smaller ones that the record-settingly large labyrinthes he’s lately taken to drawing by hand.

What we know about Pittsburgh's next police chief

Sexist cartoons in the Post-Gazette draw ire from Pittsburghers