The plainer the evidence becomes that climate change is real, the louder some people deny it.

No surprise that the latest frothing attack comes from Jack Kelly, the Post-Gazette’s designated right-wing attack dog. For years, Kelly’s been denying the mountains of evidence on climate change — that’s it’s human-caused, that it’s dangerous, that it’s not hypothetical but already happening. But his column in yesterday’s Sunday Forum might be a new low.

Tellingly, the column was framed as a “fact check” of Secretary of State John Kerry’s statements on the dangers of climate change.

The problem isn’t that Kelly misrepresents Kerry’s statements (though he arguably does that, too). He also implies that any misstatements by Kerry repudiate decades of climate science.

Oh, that and the fact that the source Kelly leads with is Myron Ebell, whom Kelly identifies as “an environmental expert” from the Competitive Enterprise Institute, a long-time engine of climate denial with heavy backing from the fossil-fuel industry.

Kelly's column, headlined “Climate Craziness,” has the subhed, “Kerry spreads misinformation.” Kelly, with Gobell’s help, claims two big gotchas on the secretary. One, according to Kelly, was “The temperature of the Earth had been relatively stable ‘for literally millions of years,’ Mr. Kerry suggested.” The other was that greenhouse gases constitute “a very thin layer of gases” in the atmosphere.

Kelly goes on to note several instances — include one dated to 52 million years ago! — where the earth’s climate was different than it is today. And he quotes Ebell as saying that the quote on the “thin layers of gases sets a 'new standard’ for spreading disinformation.”

Here’s what Kerry actually said (back in February, in Indonesia):

Hi there, this week's MP3 Monday features Troxum, whose self-proclaimed spacesynth music is inspired by alien rainforests, sub-atomic dance parties, and terraforming planets. Troxum plays the main event of the VIA Festival on Sat., Oct. 4 at Downtown's Union Trust Building.

Fashion Week events continue around town through Sunday. A dispatch from last night's runway show by Danielle Fox is in Program Notes.

For Tammy Jackson and Lorette Pendergrast, adding rhinestones to Pittsburgh’s blue collar is a family affair.

The mother-and-daughter design duo both sent lines down the runway last night for Pittsburgh Fashion Week. In its fifth year, Pendergrast and Jackson were a part of the largest PFW to date, with 27 designers and more than 340 models participating.

Model Miyoshi Anderson launched Fashion Week in 2009 after she saw her job opportunities in the city declining. Anderson was looking for ways to bring work to herself and other models, but then stretched out to designers, makeup artists and hair stylists.

GQ might have bestowed the title of “third worst-dressed city” on Pittsburgh in 2011 for such offenses as wearing game-day gear when its not even football season. But, with the 2014 resurfacing of non-profit Fashion Group International in Pittsburgh, Anderson believes the city will embrace fashion and fall colors other than black and gold.

“It’s going to be the adhesive along with Pittsburgh Fashion Week and other events to work together for that boom outreach,” Anderson says. “It really helps the designer focus on how they want to do their business. We want to get [their designs] into storefronts.” 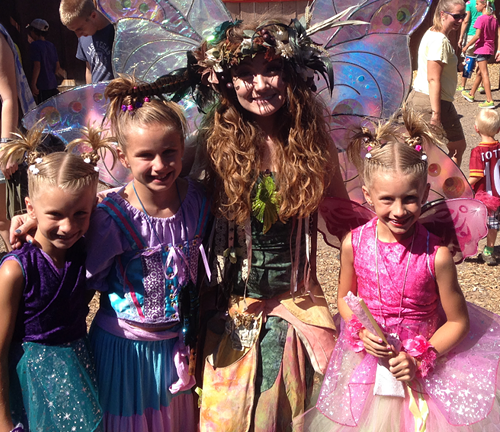 If you’ve been craving an opportunity to wear a suit of armor, talk like Hamlet and eat giant turkey legs without fear of being judged by others, the final weekend of the Pittsburgh Renaissance Festival may be what you're looking for.

The festival, which started August 23rd, ends Saturday and Sunday with its annual Oktoberfest celebration. The festival runs from both days from 10:30 a.m. to 6 pm. in West Newton (about 50 minutes from downtown). Details on location, prices and a list of events can be found here.

It’s also a great place to use all of that Monty Python dialog that you’ve spent years memorizing.

What's it like to be openly gay in the Pa. legislature?

When state Sen. Jim Ferlo announced that he is gay in the middle of a press conference encouraging action on hate crimes legislation earlier this week, he became the first openly gay senator — and one of just three Pennsylvania state legislators to share that distinction.

"I paused and I just kind of spoke, as I often do, from my own personal emotional viewpoint," Ferlo told City Paper in a recent interview. "I think more and more it’s important that people make statements and be out front on some of these causes. I thought it would be helpful in a way. I wasn't looking to grandstand."

We'll have more from Ferlo in print and online next week, but we reached out to state Rep. Mike Fleck — one of just two openly-gay Republican state legislators in the country — to get a sense of his experience since coming out in December 2012.

"I’m excited for him," Fleck says, "I’m sure it was a relief; I know it was a relief for me. I’m a proud gay man — but Jim has always been there on the issues. It wasn't much of a secret — that’s where I was [before I came out]."

I asked Fleck if he ever felt like there was a tradeoff between being open about his sexuality and being taken seriously by his more conservative peers. For the most part (with a few exceptions), he said, being gay has had little bearing on his interactions with his colleagues.

"There’s a certain respect there between legislators. I’m sure there are few legislators who have a problem with it, but they’re not in my face."

Perhaps not surprisingly, the guy who seems to have the biggest problem with Fleck is ultra-conservative Daryl Metcalfe. "He’ll not want to sit near me," Fleck says — and when Fleck tried to introduce a resolution honoring the Boy Scouts (Fleck himself was an eagle scout) "Daryl said he would contest it if I ran it. It put the speaker in an awkward position."

And while experiences like those are outliers in Harrisburg, when he's back in the district, just south of Penn State, it's a different story. Unlike Brian Sims — a Philadelphia Democrat — and Jim Ferlo, Fleck says he is often the most visible gay person in his community.

"It’s a bigger deal in my area. There’s only one or two gay activists in my district," he added. "I had a really heated race in the primary — there was a lot of homophobia. My own opponent called me a fag years ago. I do get that occasionally; that makes me cringe when I hear that."

Fleck says he supports including LGBT people in the state's hate crime laws, something Ferlo has been pushing for since 2003. "There’s no excuse for that kind of hatred," he says, referring to a Sept. 11 incident in Philadelphia in which a gay couple was badly beaten, seemingly because of their sexual orientation.

Most of the time, though, Fleck says his experience being a gay leader of a rural Republican district is positive and he hopes he's setting an example for those who might be afraid to be open about their sexual orientation. 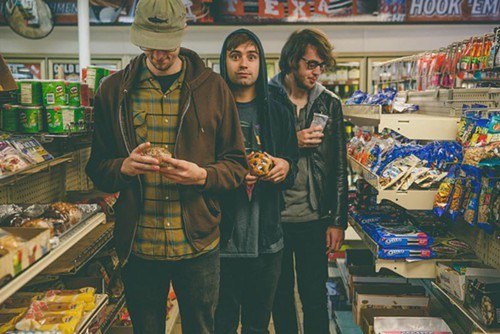 Cloud Nothings, Cleveland-based lo-fi pop group founded by Dylan Baldi, has announced a new and extensive tour covering most of the U.S. and parts of Europe and Australia. Their first stop is tonight (Fri., Sept. 26) at the William Pitt Union in Oakland. Originally a solo project, Cloud Nothings was born as one of a series of fake bands created by Baldi on MySpace as platforms to release his original music. It quickly gained both recognition and actual members before signing with Bridgetown Records and opening for groups like Woods and Real Estate. Most recently, Cloud Nothings released sessions for Spotify and KEXP, as well as third full-length album, Here and Nowhere Else. The new work explores a more detailed approach to song writing and production, intertwining powerful melody with noise-rock.

A three-year-old festival built around street-legal art cars and an arts fest in its second year hit Garfield together on Saturday.

The car component is an expression of Sauer’s love for art cars — vehicles with objects glued or otherwise attached to them. The decorations can be anything from plastic toys to fully themed adaptations that turn a vehicle into an Addams Family house on wheels, like one of the cars on display at last year’s festival. The art cars this year will gather at Penn and Winebiddle.

Arts in Motion, meanwhile, offers performances on an outdoor stage at Penn and Winebiddle and hands-on art activities.

The festival is free, with overflow parking at the K-2 convenience store lot at 4900 Penn Ave. due to ongoing road construction.

The festival runs from noon-8 p.m. on Saturday. A complete schedule is here.

This Saturday, Sept. 27, A.D.D. Fest returns to The Mr. Roboto Project. The night is jam-packed with ten excellent reps from Pittsburgh’s music scene, including: Margo Van Hoy, a graceful mood singer with soft sounds; Ouais (French for “yeah”), an indie punk group; and Roulette Waves, a grungy rock group with a tight sound. The genres span from soft pop to punk, so there’s a little something for everyone.

A.D.D. Fest prides itself on presenting the ten performers with the challenge of playing a ten-minute set. Because the event only allows bands to participate once, you’ll be sure to hear some newcomers. It’s a tasting of new Pittsburgh sounds. There will also be (you guessed it: ten) raffle prizes donated by Pittsburgh artists and businesses. This year features donations from Constellation Coffee, Artists & Craftsman Supply, Love Bikes, artist Katelyn Gould and others. It’s only $5 to get in, so don’t miss out.

Dom Flemons is bringing back old-time music with unbridled enthusiasm. As a former member of grammy-winning Southern string group Carolina Chocolate Drops, Flemons has extensive experience with traditional African-American string bands, and brings this bluesy flavor to his new solo album, Prospect Hill. It’s his first since leaving the group, and it features him on banjo, guitar, harmonica, fife, bones, and jug. The album showcases his mastery of a variety of styles, including Jazz, R&B, blues, and also includes a few original tracks.

Flemons is known for his outrageous playing style and energy, so make sure to see him at Club Cafe on September 28th. In the meantime, check out our exclusive premiere of the video of his new song off of Prospect Hill, “Have I Stayed Away Too Long.”