Employees at the Rivers Casino say their employer has been cutting its workers' hours to avoid providing them with health insurance. Under the Affordable Care Act, employees working 30 hours or more must receive health insurance, but those at a protest outside of the casino earlier today say management has been trying to skirt the requirement.

"Not only are they not giving workers enough hours to qualify for healthcare, those who do work 30 hours, they're reducing their hours so they don't qualify," said Jack Shea, president of the Allegheny County Labor Council. 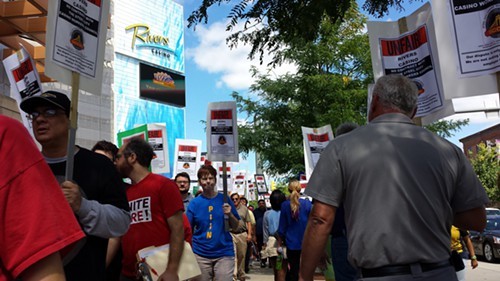 A coalition of workers known as the Steel City Casino Workers Council has been fighting to unionize casino employees for more than a year now with the help of Unite Here, a North American labor union. Members of the council believe unionizing is the best way to ensure their hours aren't cut and to increase their wages.

"We're fighting for a fair process," said Nicole Gallagher, a casino cocktail server. "Personally, not having the protection of a union, I've been subjected to terrible intimidation."

The council claims casino management has intimidated and even fired employees to prevent them from forming a union. Last year Unite Here filed more than 30 charges of unfair labor practices against the Rivers Casino's owners but since then the casino has agreed to post flyers notifying employees of their right to unionize.

“Rivers Casino is proud to have been voted a ‘2014 Best Places to Work’ by our Team Members, and we respect their rights to choose whether to be represented by a union," casino spokesperson Jack Horner said in a statement. "So far, our Team Members have chosen to remain independent.”

The casino did not respond to questions about the alleged intimidation. But Unite Here representative Jon Scolnik says the intimidation has continued.

"What we want is for the casino to play fair," Scolnik said "They've violated labor laws and until they play fair we're going to keep doing this."

The workers were joined by employees at a casino in Philadelphia, owned in part by one of the partners in the Pittsburgh casino, who also complained of unfair treatment of workers. Union workers throughout Pittsburgh representing organizations like the Service Employees International Union and the United Food and Commercial Workers International Union were also there to show support.

"All of those unfair labor practices corporations are pushing to keep people from earning a living need to stop," said Tina Schreckengost, a union employee at Giant Eagle who came out to support the casino workers.

The Moth at the Byham

City ignores, then rejects CPRB recommendation to fire officer who was found to have violated police policies