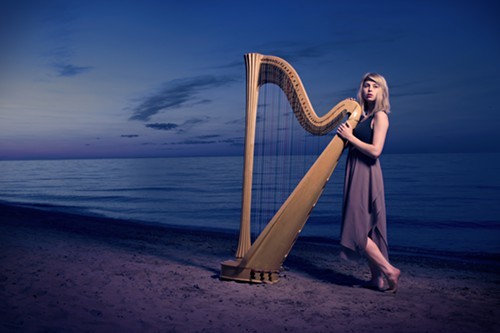 The Rochester, N.Y., native plays live with two other members (backing her on drums, guitar, keys, etc.) Their sound is like that of indie rock, but the focal point is harp, not guitar. The shift is focus is refreshing and the result is an elegant harp fronted trio. Davis released Fortune Teller EP in January and her new single "Out There Alone" is now streaming.

Starting at age 8, Davis began studying harp with Grace Wong, principal harpist of the Rochester Philharmonic Orechestra, with whom she studied with for nine years. She played in the Rochester Philharmonic Youth Orchestra from 2006 to 2010. One of Davis's first claims to fame was performing covers on YouTube, getting 130,000 views on a version of Sufjan Stevens' "Casimir" and 75,000 views on Elliott Smith's "Twilight." While not touring, Davis attends the Crane School of Music at SUNY Potsdam and studies harp performance.