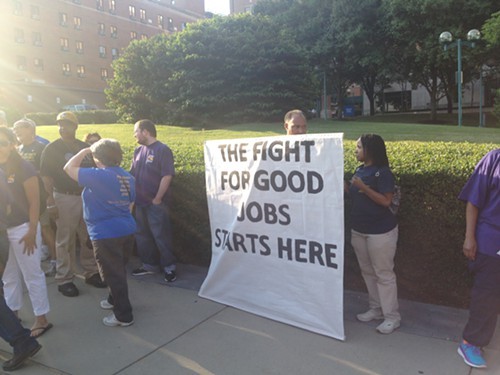 About a hundred protestors gathered outside of UPMC Shadyside this morning — at times blocking traffic along Centre Avenue — to call attention to what union organizers say is the "retaliatory" firing of union janitors there last month.

As Donald Malcolm, who union organizers say was one of the 10 employees fired, climbed atop the bed of a pickup truck to address the crowd, he explained that he had worked at the UPMC medical office building for 12 years and "all of a sudden we hear we're gone."

That prompted dozens of protestors to flood into Centre Avenue shouting, "Shame! Shame!" and "I believe that we can win."

After snarling traffic for several minutes, SEIU district director Sam Williamson corralled people back onto the the sidewalk.

Union organizers questioned the timing of UPMC's termination of the union contractor that employed the janitorial staff of the medical office building, saying it was retribution for supporting healthcare workers' efforts at unionization.

UPMC dismisses the claim that the decision had anything to do with walking back union rights. "We made the decision to award the contract to a 100% percent women-owned business [...] with no consideration given as to whether the companies submitting bids were union or non-union," spokeswoman Gloria Kreps wrote in an email. She added that each of the employees under the old contract have been "offered the opportunity to interview for a position under the new contract," with comparable wages and benefits.

Eighteen local political officials (including all of City Council) appear to disagree, at least according to a letter cosigned by faith and union leaders.

"Firing a union cleaning contractor [...] and putting hard-working men and women out of a job — is another outrageous disappointment entirely," the letter states. "If this situation is not corrected, we will support 32BJ members in their public fight to save their jobs."

About a dozen protestors, including Pittsburgh United executive director Barney Oursler and reverands Rodney Lyde and Ron Wanless marched around the corner to deliver that letter to UPMC Shadyside building manager Janet Crowley.

They were greeted by three UPMC security guards, who said only those seeking medical treatment could enter.

"We're not trying to escalate this — this is a small contingent," Lyde said, just a few inches away from a UPMC officer, who repeatedly asked protestors to step back.

And after conferring with building manager Janet Crowley, Kim Sweeney, who identified herself as a UPMC security official, said "[Crowley] has been put in an uncomfortable position before" and cited "safety reasons" for refusing to allow protestors to meet with her. Lyde led the assembled protestors in prayer.

Malcolm — the fired part-time employee — stood watching from the back of the crowd, two job applications stuffed in his back pocket.

"I just don't understand why they would kick us out," says Malcolm, "We're not asking to be millionaires, we're asking for a living wage."