Azar House, a transitional housing program in Mt. Oliver, has barely been open one year. But in that time, the program for homeless women age 18 and up has been a safe haven, providing shelter and guidance to a variety of women, some who have been recently released from prison, and others who have been victims of domestic violence.

"Some of our people have felonies. No one has given them a chance until they came here," said Kimberly Smith, Azar program director. "This is a safe place for them. It's been a great program and we'd hate to lose it because we know the impact it has."

At a press conference today, though, Azar's leaders announced they were being forced to shut down the program on June 30th. The program, run by the Joshua Development Corporation, a nonprofit organization founded by Potter's House Ministries church, has struggled to secure funding since its opening and would need $200,000 to keep it's doors open. 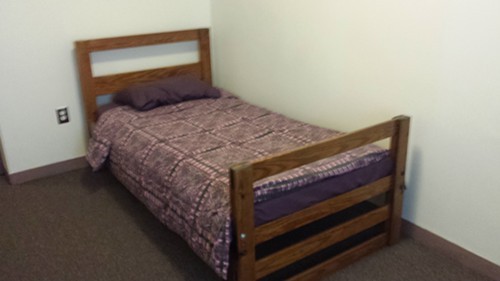 "Azar makes me feel wanted. I'm stable," said resident Ruth Ann Ley, one of five women who will be displaced. "I don't want to go anywhere else. It's not about finding somewhere else, I just don't want to get lost in the chaos at another place. If I'm not stable, I'll go back to doing the wrong thing. This place has saved my life."

As a result of shifting priorities in the U.S. Department of Housing and Urban Development, Azar plans to transition to a permanent housing facility. But because of ongoing budget constraints, the program is unable to stay open during the transition.

"The trend started two years ago where HUD decided they no longer wanted to fund new transitional housing programs," said board chair Corey Lakins. "We've always needed funding. We have been operating without any city or county funding, but we need additional funding in order to stay open during the transition."

Azar's leaders are still hopeful private or public funders will come forward to save the program. Residents have written letters to the Allegheny County Department of Human Services in hopes their program could be considered for emergency funding from the department of hunger and homelessness.

"We're putting a plea out. We need help," Lakins said. "Nothing is too small."

The seven day, 24 hour program has room for 16 women, but in anticipation of having to close, Azar hasn't admitted any new residents. There are 19 women on their waiting list.

"This place is a godsend to me," said resident Lori Davis. "It feels like home and the ladies and the staff are like family to me."

"I can tell you this, I've felt peace and tranquility and I never knew transitional programs could be like this," said resident Janice Dolash.