It’s customary, at least among old-timers, to complain that there’s too little visual fine art at the annual festival. And it’s true, there used to be more of it, located more accessibly to the average festival-goer.

The festival is still a pretty good place for big-statement public art, like Alexandre Arrechea’s “No Limits” building sculptures this year, and Edith Abeyta’s “O:ne:ka’.” Meanwhile, the annual juried show has also carved out a nice niche for itself — even if that niche is situated on the fourth floor of the Trust Arts Education Center, a building located a good ways from the center of the fest action.

This year’s JVAE features 59 works by 52 regional artists, and is juried by: John Carson, a Carnegie Mellon art professor; Nicholas Chambers, a curator from The Andy Warhol Museum; and Rachel Delphia, a Carnegie Museum of Art curator.

There are works in all media and for most tastes. Here are several that caught my eye.

Mary Weidner’s richly colored painting “Wedding Vows” gives that feeling of being in the second row at the ceremony, which is rendered at precisely that oddly evocative moment when the officiant’s gesture makes him look like he’s doing Sinatra.

“Mississippi River Storm” is Lindsey Peck Scherloum’s homage to homemade craft that float down the big river every season; it consists of an atmospheric photo wittily displayed on a background of scrap wood, with some handwritten explanatory text. 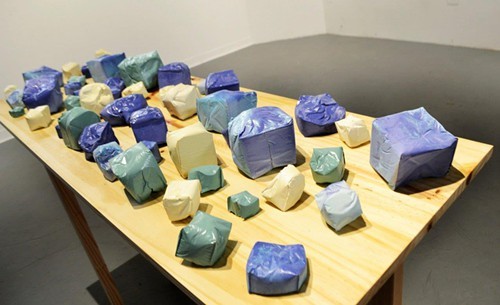 Lai Fenny's “Little Nuggets” are a set of wood-and-plaster sculptures — little cubes distorted like packing boxes the FedEx guys got a little impatient with. Done in muted tones of green, cream and blue, they’re a festival of contours.

Rebecca Signorello’s “The Sisters” is an oil painting of four women in a group close-up that has the psychologically fraught air of a mid-period Bergman film. 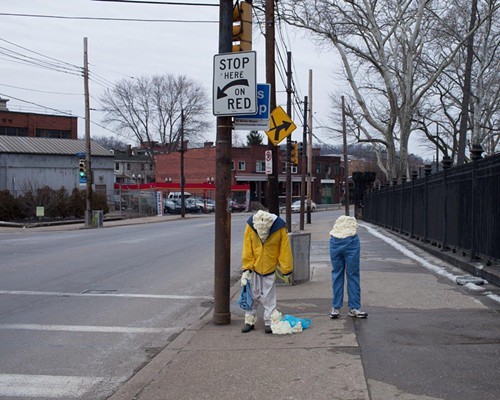 “Bus Stop” made me laugh out loud. Travis Mitzel’s large-scale photograph documents a sort of surreal prank: One humanoid figure made out of spray-foam insulation, and a second that’s just legs, stand dressed in street attire, side-by-side at a city bus stop.

Short videos by Dadpranks, show on a wall, offers more surrealism, some of it comedy in a deadpan Freudian vein. One sequence takes two slices of bread and makes sandwiches out of a bunch of unlikely items, including a hank of fake blonde hair.

Zachary Brown’s “3 Masked Men” is a large triptych that tips its cap to Magritte, and is made memorable by its dark hues and its rich media: in oil, metal leaf and ink.

The Juried Visual Art Exhibition continues through Sunday and is open noon-8 p.m. daily. Like the rest of the festival, it’s free.

The Trust Arts Education Center is located at 805-807 Liberty Ave.