At a rally at the Pittsburgh Public School District building Wednesday, activists criticized Gov. Tom Corbett for cuts to education funding in the state budget and called on the public to vote Corbett out of office in November. 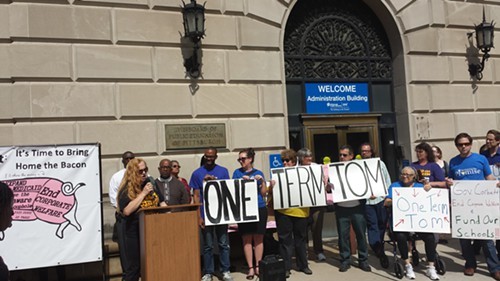 "We're all in this struggle together and our struggle is for fair funding for our schools," said Rev. David Thornton with the Pennsylvania Interfaith Impact Network. "[Corbett's] cuts to our schools will be remembered at the voting booth November 4. We have to make Tom Corbett a one-term governor."

Speakers at the rally said they worried Corbett would avoid a potential $1.2 billion budget deficit forecast for the coming fiscal year by cutting education funding even further. They said Corbett cut funding for education by nearly $1 billion in 2011 and has not restored funding in subsequent budgets.

"When state funding for public education is cut, some of the most vulnerable children in our state are hurt," said Harold Grant, a representative for the Pittsburgh Federation of Teachers union.

Grant listed other ways the state could balance the budget and restore funding to education. Among them were taxing Marcellus Shale drilling, closing the Delaware loophole which allows companies to avoid paying state taxes, and expanding Medicaid, which would bring in federal funding.