Anti-Wolf mailer raises question: Why do Republicans hate capitalism so much? | Blogh

Anti-Wolf mailer raises question: Why do Republicans hate capitalism so much?

Here's something you may not have expected to see in this year's gubernatorial campaign: a state Republican Party mailer that echoes Democrats Allyson Schwartz and Rob McCord, criticizes the practices of successful businesspeople ... and defends our public-sector unions.

A sharp-eyed correspondent in Pittsburgh's East End forwarded us a mailer faulting Democratic frontrunner Tom Wolf's business practices. Headlined "A Wolf raided Pennsylvania's pension fund," the mailer decries Wolf's business record as "a story all too familiar" — in which "wealthy corporate titans pocket millions in leveraged buyouts, while the average middle-class taxpayer gets fleeced." (See below for a reprint of the mailer.)

State GOP spokesperson Megan Sweeney confirmed that the party was sending out mailers with the intent of "educating voters on Tom Wolf. There are a lot of questions that he's refusing to answer, and we're taking that directly to the voters."

Similar to attacks previously launched by Schwartz's campaign and that of Rob McCord, the new mailer alleges that Wolf earned big profits at others' expense. Also like those attacks, it relies on a Philadelphia Inquirer story delving into the history of Wolf's York-based cabinet-making firm.

The Inquirer story charts the business' history since 2006, when Wolf and relatives cashed out of the company in a $60 million leveraged buyout. But the Great Recession struck a couple years later, and the firm was struggling to make debt payments related to the transaction. That prompted Wolf to reinvest in the company, whose finances have since stabilized even if they haven't fully recovered.

The mailer's pension-raiding accusations stem from the fact that the State Employees Retirement System invested some $50 million in the fund that bought up the stake in Wolf's company. The state government workers' pension is the largest investor in that fund, whose investment has obviously lost value as the company's fortunes have struggled.

The new mailer quotes the story accurately. But Factcheck.org looked at similar allegations made by the McCord campaign, and found that the pension "losses" cited in the Inquirer piece depend on a somewhat subjective valuation of the company's present worth. Moreover, even taking those valuations as gospel, the state pension fund's potential loss amounts to less than $1 million ... chump change for a fund managing nearly $27 billion in assets. What's more, Factcheck.org found:

More important, that paper loss in the Wolf Organization investment took place while Wolf himself was not running the company, and after the recession hit in late 2007. Indeed, the theoretical loss might have been worse if Wolf had not returned, re-investing personal funds and resuming management of the company in 2009.

Still, if Wolf wins the primary, it's likely you'll be hearing about this stuff again. The GOP has already claimed that Wolf's initial exit from the business was "leaving retirees holding the bag." And Republicans have since repeatedly insinuated that there is something shifty about Wolf's business dealings.

But hey, I'm not going to complain if the GOP wants to start waging class warfare. This is, after all, the party whose chairman was recently seen defending the business practices of Mitt Romney. Welcome to the ramparts, comrades! 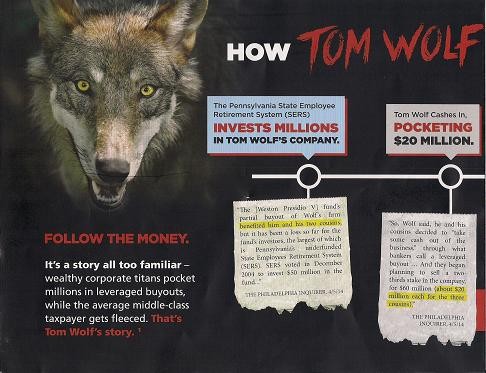