Colleen Petrucci, a longtime faculty member and administrator with Pittsburgh Musical Theater, has been named the group’s incoming executive director by its board of directors.

Petrucci takes over from Ken Gargaro, who launched MT in 1990. Petrucci assumes her new post July 1.

PMT runs a musical-theater school for children and also stages professionally produced shows at the Byham Theater, like the recent Les Miserables.

Petrucci today announced her own first season, to start in October with A Chorus Line. The other three shows includes Disney’s Little Mermaid, Young Frankenstein and Peter Pan.

Gargaro, who announced his retirement April 16, will remain on the West End-based PMT’s board.

Petrucci grew up in the Knoxville/Mount Oliver area and took dance classes, but remembers being surprised to learn that performers also had to sing to live music. “It just intrigued me,” sais Petrucci, a Brentwood High School graduate, in a phone interview earlier this week.

She later worked with PMT as a performer, in 1996, in a production of Crazy For You.

But Petrucci says she's always been less interested in the spotlight than in behind-the-scenes. "Even when I was very young, I wanted to be a dance teacher," she says.

In 1997, she joined the faculty of the education program, the Richard E. Rauh Conservatory. She became Conservatory Director in 2001, and general manager in 2003.

Pittsburgh Musical Theater runs a seven-days-a-week education program for children ages 4 to 18, with evening and weekend classes and a summer session. Currently, about 300 students are enrolled.

“You get an entire musical-theater education just by coming on Saturdays,” says Petrucci. Some high school students also attend their regular school for half a day and PMT in the afternoon.

All the performers under 18 in PMT’s shows are PMT students, says Petrucci. Students also perform in the company's Conservatory Series, consisting of fully staged productions like last year’s A Lyrical Christmas Carol.

She says that before she was even on the faculty, her own two children were PMT students. Her son later danced with the Joffrey Ballet.

Petrucci is excited about plans to expand the school’s programming in its recently purchased headquarters, the former St. James School. Renovations to the building are ongoing.

Asked what her plans are for PMT, Petrucci says she wants to conduct extensive conversations with students, faculty and parents before she decides to make any changes. 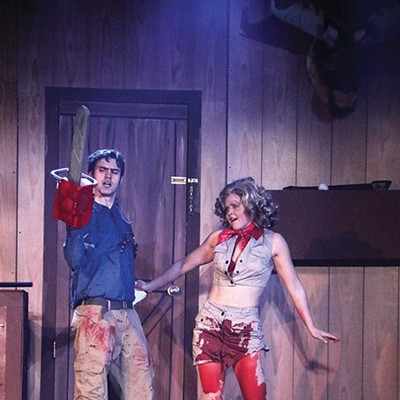