Tickets remain for the next edition of WordPlay, a Bricolage Productions series that blends comic true stories with a score rendered live by a DJ. 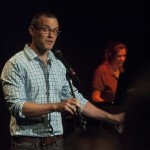 The soundtrack will be by DJ Firefly.

The first of the Pittsburgh WordPlays was held in June, as was a lot of fun. Olifson launched the series in Los Angeles before he relocated here.

Tickets are $15 and are available here.

WorldPlay is accepting submissions for future shows of stories 1,5000 to 2,000 words in length. Submit stories at submissions@wordplayshow.com. Forthcoming shows are on July 18 and Oct. 10.

Crisis nursery to open in Pittsburgh