While springtime symbolizes a time of rebirth, in Pittsburgh and other cities, warmer weather also typically means an increase in homicides. At a rally at his church in the Hill District today, Rev. Glenn Grayson highlighted Pittsburgh's increased homicide rate throughout the summer months as he held up newspaper clippings of articles reporting gun related deaths. 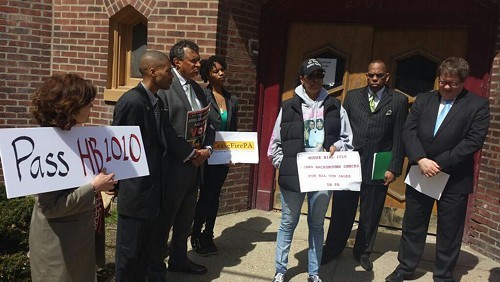 Grayson was one of a dozen activists at a rally calling for gun-control legislation. In Pennsylvania, the state House is considering HB 1010, a bill that will tighten up background-check requirements on rifle or shotgun sales. Currently, state law requires handgun sales to be carried out by a licensed firearms dealer, who must conduct a background check on the buyer. But the law exempts sales of long guns, which can be sold privately without such a check.

"I challenge the community to partner with us as we try to close this loophole," Grayson said.

"Unfortunately, I think the reverend's going to be at the funeral home again this summer," said City Councilor Dan Gilman, another supporter of the legislation who attended the rally. "And although we don't want to go to another funeral, we know we're going to, because government isn't taking action."

According to the group Mayors Against Illegal Guns, between 2007 to 2011 long guns were used in 6.2 percent of Pennsylvania gun homicides in which the gun type is known. Long guns were also used in the mass shootings in Newtown and Aurora.

"If we're honest, when we hear another shooting in the news, we're not shocked," said Tim Stevens, co-convener of the Coalition Against Violence. "This bill is one tool of many that are needed to begin to cease the violence."

"We all know that keeping guns out of the hands of people who shouldn't have them is the first step," said Rob Conroy from CeaseFirePA, the gun-control advocacy group who hosted today's rally.