"It scared the living shit out of me": Adam Duritz recalls finding out about Kurt Cobain's death | Blogh

"It scared the living shit out of me": Adam Duritz recalls finding out about Kurt Cobain's death 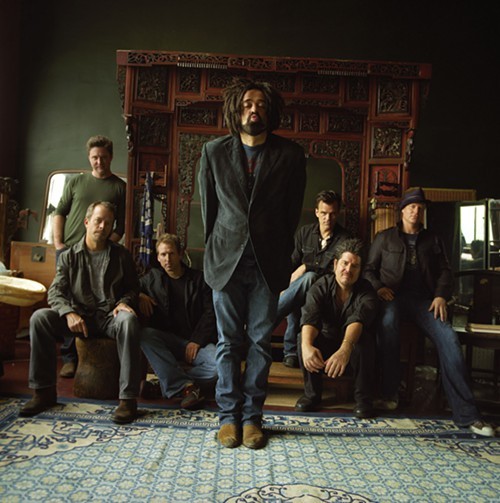 In the spring of 1994, Adam Duritz was on a fantastic ride: The 29-year-old singer-songwriter and his band Counting Crows had a sudden hit with "Mr. Jones," from the previous fall's album August and Everything After; a January appearance on Saturday Night Live helped the track to shoot up the charts.

As he told City Paper today as he prepares for this summer's Counting Crows tour (which hits Stage AE on June 27), he was blindsided when news came in early April that Kurt Cobain — whose Nirvana had blown up only a couple years prior, and were labelmates with Counting Crows at Geffen — had killed himself.

I knew Kurt; we were label-mates, we were signed by the same guy [Gary Gersh]. We were like his two little brothers at the time. I think I was probably the first person on the European continent to know about it. I'd hung out with him a few times; I really liked him. Weird, but nice guy.

We were in Europe at the time; it was our first trip to Europe. We'd played Saturday Night Live in January of that year, and our record wasn't even in the Top 200. It jumped 40 spots a week for the next five or six weeks to land us somewhere around No. 6 or so.

It was nerve-wracking for me at the time, because I wasn't sure what we'd gotten ourelves into. It's impossible for anyone to know in those situations what's going to happen. I could see what was going on around me with Kurt. All the mess that went on between him and Geffen, him and the producer of In Utero. I had a pretty close-up seat. I was pretty nervous about it myself; we almost said no to the Rolling Stone cover when it came up. I mean, you kind of can't. You'd be crazy to. There's your career made right there in some ways. But I was also very nervous: What's my life gonna be like when I'm on the cover of every magazine? People may think that sounds like a funny thing, but it was really freaking me out — the idea that you walk down the street and people look at you and look at the newsstand and you're on the cover. That seems scary to me, you know? Maybe it's not scary to other people, but I'm a little weird sometimes.

But we said yes, and we went over to Europe. It was our first trip, it was kind of hectic, and Rolling Stone had decided to send David Wild to write the piece, and ... Mark Seliger, the photographer. They were sent to meet us in Paris. We arrived there really early in the morning, and we were in the lobby of this hotel, because the rooms weren't ready. And we were all sitting around in this little hotel in Paris, and I'd been talking to David and Mark, they're really nice guys, and in talking to them I was feeling a lot better about it. I started to feel a lot more relaxed about the whole thing.

And then there was a phone ringing, in the room, and ... the front-desk person said "Is there anyone named Adam Duritz here?" and I said "Yeah, it's me," and he said "There's a phone call for you; pick it up over there."

I feel like it's all really clear, but it kind of feels like a dream, too. It was like an ornate, kind of wrought-iron table, and there was a chair by it and an old phone, a house phone. And I went over and picked up the house phone and it was our A&R guy, Gary, whose, like, kids are my godchildren.

I knew Kurt had been missing for a few days, everyone knew that. Gary called me and said "They found Kurt's body. He shot himself. He's dead."

Yeah, I don't remember much more about it, but I don't think anyone else knew. Gary was up there with them, and they found him, and he called me. I'm not sure anyone else knew about it. I think I found this out before anyone.

On Twitter the other day, David was talking about remembering he met me the morning Kurt Cobain died — the day we found out. We've been friend since, we've known each other so long. But at the same time, it was this terrible day.

And it scared the living shit out of me. I'd just wrapped my head around doing this thing, and then I found out — here's this guy who's just been on the cover, and look what happened to him. And he was a nice guy, that I knew. I sat across from him at his manager's house with his wife and his baby having lunch. Just a guy. But ... he was on the cover of Rolling Stone, and he was the guy who shot himself. It scared the living shit out of me. I was just like, "What the fuck did I sign up for?"

He had some troubles. But I had a history of mental illness that I wasn't talking about. I knew about it, but nobody else did. And I'm sitting there in Paris, and that just scared the shit out of me, honestly. I remember that morning really, really well. Shit like that will imprint on you.

I can remember every minute of it, but at the same time it feels like a story I'm telling myself. And maybe it is ... it's been 20 years.

More of my interview with Duritz will run in CP closer to the June 27 show; the band has been practicing material that'll be part of a new release that's been recorded but doesn't have a definite release date yet; Duritz told me he met last week with representatives of a few labels, but he has yet to decide what label — if any — the band might sign with. After the band's relationship with Geffen dissolved in the late 2000s, Counting Crows released a few live albums, and a studio album of covers and interpretations of other writers' songs, but this is their first new studio album of original material since the split.