Jordan Miles: 'They never said they were police officers' | Blogh

Jordan Miles: 'They never said they were police officers' 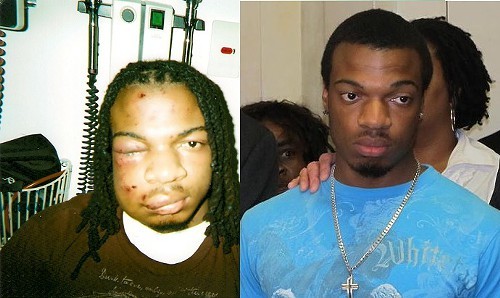 Jordan Miles spent this morning detailing the night he says three police officers confronted and beat him as he walked to his grandmother's house in Homewood.

Miles says officers Michael Saldutte, David Sisak and Richard Ewing jumped out of a car and attacked him without ever identifying themselves as cops. The officers claim they identified themselves and approached Miles because he was acting suspiciously.

"I thought I was being mugged," Miles said during his testimony. "At the time I thought they were going to take my coat, my wallet, whatever I had on me. They never said they were police officers."

Miles said he was struck more than 20 times by the officers before being handcuffed face down in the snow. But even then, he said the beatings didn't stop.

At this point Miles maintains he was still unaware the three men were police officers.

"The fact that they beat me after I was handcuffed gave me even more reason to believe these people weren't police officers," Miles said.

It wasn't until two uniformed officers arrived and put him in the back of a van that he began to piece things together.

"When I saw the police van I thought I was going to be saved," Miles said. "I was very confused because I didn't do anything wrong."

Miles was later taken to the hospital. He spent the night and most of the following day in jail.