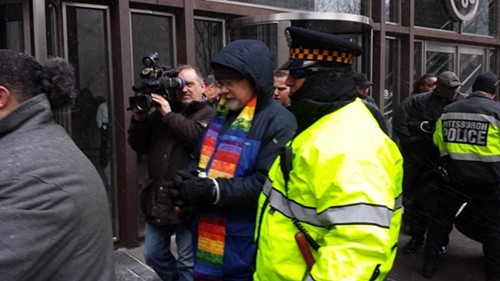 Ten clergy members belonging to the Pennsylvania Interfaith Impact Network were arrested and removed in handcuffs after they blocked the entrance to the USX Building, home to UPMC.

Protesters say they wanted to meet with UPMC CEO Jeffrey Romoff, and when they were denied entry to by building security, they blocked the doors refusing to leave. About a half-dozen police officers were on hand at the beginning, and it was obvious that at least some of the 100 or so protesters that gathered would be arrested. The large crowd moved form the plaza in front of the building, leaving the 10 faith leaders to block the door. 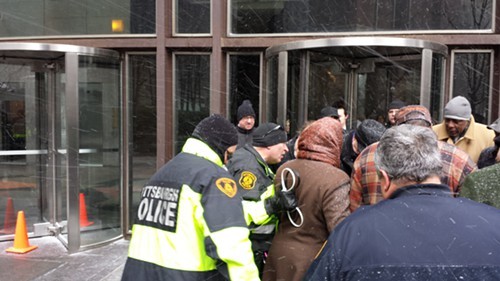 City police were patient with the protesters and when it became evident they would not vacate the scene willingly, they were cuffed and removed. Officers treated the arrestees — some of them elderly — carefully, asking them repeatedly if they were sure they didn't want to voluntarily leave the scene.One of those arrested was Rev. Rodney Lyde, who spoke to City Paper as he was led away in handcuffs.

"We attempted to deliver our declaration on behalf of the faith community of Pittsburgh to Jeffrey Romoff that we want UPMC to lead the way in helping people into the middle class. But Mr. Romoff didn't want to meet with us, so he sent his fine security who in turn called these fine officers and now we're being arrested," Lyde said. "I have no regrets at all. We're going to continue to push forward with what's right.

There have been regular protests at UPMC's Downtown headquarters for the past several months — part of an ongoing unionization campaign being led the Service Employees International Union. (Today's protest, for example, was preceded by a declaration from PIIN that "UPMC should lead the way in bringing people into the middle class by providing living wages, affordable healthcare and the environment in which people can speak with one another without harassment around the issues of good employment.") But today's event seemed to have a different tone from many other demonstrations. Some of the protesters showed a willingness to be arrested, while building security guards were more forceful in their exchanges with protesters and the media.

Those taking pictures or videos were told that picture-taking was not permitted in the plaza. In fact, a security guard tried to physically block a KDKA cameraman from filming the arrest.

Protesters said they were undaunted.

"We believe that this is such an important part of the future of Pittsburgh that many of us are willing to put our security at risk," said Rabbi Ron Symons, one of those arrested. "We believe this message has to come out from the community-at-large. We need to build a better Pittsburgh, a sustainable Pittsburgh and that comes only with sustainable jobs.

Was today's protest a sign that tactics were escalating, and that protesters would be risking arrest in the future? "I believe that it is," Symons answered, "and I believe that we are."