A Black History Month film series continues with Sarabah , a recent documentary about a musician fighting to end the practice of female genital cutting in her home country of Senegal. 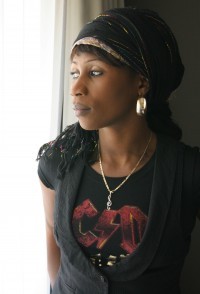 Co-directors Maria Luisa Gambale and Gloria Bremer follow hip-hop artist Sister Fa, herself a survivor of genital cutting, as she and her band travel to rural Senegal to begin a music-filled education campaign.

The hour-long documentary premiered at the Movies That Matter Film Festival in The Hague, Netherlands, in 2011, where it was named Best Documentary. It’s since screened at some three dozen festivals around the world and on Link TV.

The film is in several languages, including French and Wolof, with English subtitles. Watch the trailer here.

A free screening is held tonight at the Carnegie Library of Pittsburgh — Homewood, 7101 Hamilton Ave. The show, presented by the library and Sembene: The Film & Arts Festival, starts at 5:30 p.m. A discussion follows.