UPDATED: Port Authority says it's a felony to assault its drivers ... but there's a catch | Blogh

UPDATED: Port Authority says it's a felony to assault its drivers ... but there's a catch 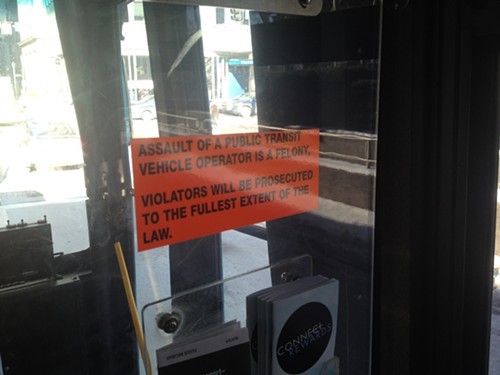 Over the past few weeks, Port Authority has been not-so-subtly reminding the public not to mess with its drivers.

They've installed orange stickers on virtually every vehicle which read: "Assault of a public transit vehicle operator is a felony. Violators will be prosecuted to the fullest extent of the law." And while assaulting a driver will likely result in felony charges, the sign — legally speaking — isn't quite accurate.

"If that’s a statement made in a legal brief, we’d say that’s inaccurate," says John Burkoff, a Pitt law professor. But "It’s certainly not far off from the truth."

Technically, according to state law, it is a felony to assault a public transit employee if a person causes "or intentionally, knowingly or recklessly causes serious bodily injury." But if someone causes (non-serious) bodily injury, the DA could bring misdemeanor rather than felony charges for the assault. (A first degree felony carries a maximum of 20 years in prison; a first degree misdemeanor carries a maximum of five years).

And it's clear the DA's office will err on the side of felony charges.

"If a bus driver is assaulted and there is injury, it’s a good bet that they are going to be charged with the felony one," writes Mike Manko, spokesman for the Allegheny County DA's office.

Over the past two years, the number of assaults of Port Authority drivers has been relatively stable (there were 12 assaults in 2013, three more than the previous year).

Ritchie says the Port Authority didn't install the orange stickers because "of any single incident" or trend, though he says drivers are frequently spit and cursed at — sometimes over nothing more than a fare dispute. "It's to get people to re-think the course of action if they're prone to that sort of behavior."

While we appreciate that aggravated assault requires serious bodily injury and that charges can often be downgraded/negotiated to a lesser degree even where serious bodily injury occurs, the statute provides on its face that aggravated assault of an employee of an agency engaged in public transportation, while in the performance of duty, is a felony of the first degree.

And, when it comes to the safety and well-being of our employees, we are going to make the strongest statement we believe that we can make (and push for felony charges in all cases) versus considering the “technical” possibility that charges can be reduced to a lesser degree and/or that serious bodily injury will not ultimately occur.

Any time an individual assaults a public transit operator operating a 40 foot or larger bus full of passengers, the risk of serious bodily harm is inherent. So, we believe it is an accurate and appropriate warning to the public of possible charges they could face if they resort to violence against one of our operators.

Port Authority might consolidate stops on 88-Penn and 48-Arlington bus routes; riders can weigh in on the plan until Feb. 7, 2020

Some good news from Port Authority: charging outlets on buses