Port Authority may finally have a solid financial future | Blogh

Port Authority may finally have a solid financial future

For the first time in recent memory, the Port Authority isn't asking itself how to explain that funding shortfalls require another round of service reductions or fare increases.

Today, the agency released funding projections that show it will likely not reduce service or increase fares, but instead will be looking for ways to enhance service in the short-term, while figuring out how to modernize the system in the long-term.

"We're not going to be in cut mode again," says Port Authority CEO Ellen McLean. The state funding package "confirms we can continue the existing service."

The authority released funding projections that show the state transit bill, passed late last year, will significantly increase the amount of funding the agency receives each year from state and local governments. But the projections also show that without the funding bill, the authority would have been forced into insolvency or even more service cuts.

Here's what the numbers provided by Port Authority show (if you stick around long enough, you'll find out what all this means for the average transit rider!): 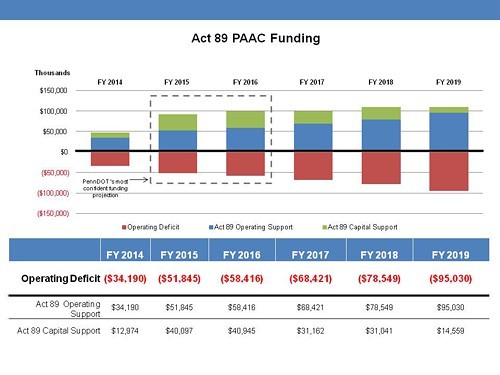 The table also shows a significant increase in "operating deficit": It jumps from $34 million in FY 2014 to about $95 million in FY 2019. That number reflects what the Port Authority's deficit would have been if it were flat-funded, and is largely related to increased health care costs and other retiree obligations, McLean says. In other words, according to Port Authority's estimates, the cost of maintaining the current level of service was slated to increase -- and the new money is mostly going to be spent on plugging what otherwise would have been a pretty sizable hole.

As operating costs (including stuff like health care) grow, more of the funding increases will go to operating expenses instead of long-term capital projects -- represented in the blue and green bars, respectively. (Port Authority must get a waiver to use capital funds for operating costs or vice versa).

Still, over the next five years, the authority will see nearly $158 million more in capital money alone. So what might that mean for the average transit rider?

Short-term:
According to McLean, the first steps will be to improve on-time performance, reliability of service and overcrowding. That effort could involve running more buses or larger buses and will be based on a more data-driven effort to understand where the problems are. Some of this will be phased in over the next few months.

Larger service changes -- like adding or changing routes -- won't happen until late September at the earliest ... though "We're not committing to any route increases," McLean says.

Long-term:
Most of the agency's long-term plans don't exist yet, since the authority has been wrestling with austerity budgets for most of the last decade (though bus rapid transit may be in the offing). McLean plans to start making those plans this summer.

The Port Authority plans to bring in national experts (yet to be named) for a week in May to help come up with an overall transit strategy through the Urban Land Institute Advisory Services Program. The idea is that by asking smart transit people around the country to come in for a week and tour the system. They'll also meet with a number of different stakeholder groups, and come up with an independent report that will help guide the authority forward, McLean says.

They'll be asked everything from "What is the strategic blueprint for a modern transit system in Allegheny County that best serves the region's growth patterns?" to questions about integrating BRT service and potential financing mechanisms.

Essentially, this is a chance for Port Authority to think seriously about what the system should look like years down the road.

And McLean, who was just named CEO Jan. 24, says she isn't about to screw up a chance to modernize the system. "We're not rushing to spend this money," she says. "This is our shot."