Five performances remain of EM Lewis’ harrowing drama about Western civilian hostages in Baghdad during the Iraq War, now being produced by the Point Park REP. 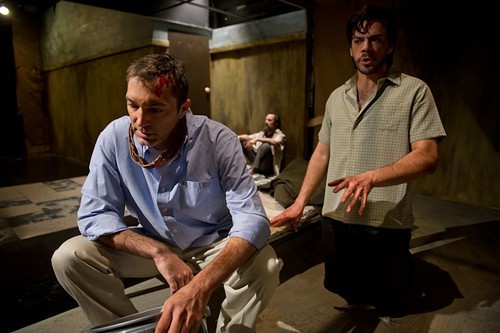 The play, especially as staged in the intimate environs of Point Park’s studio theater, is a gut-punch. The action takes place entirely on two adjacent low platforms about 6-by-12 feet — prison-cell sized — and concerns two pairs of prisoners.

One set is a naïve Midwestern anchorman (Tony Bingham) and a savvy free-lance photographer (Patrick Cannon) who were seized together by terrorists. The other is an American engineer (James FitzGerald) who after six months alone is joined by a British embassy worker (Diana Ifft).

While the politics of the war loom over the play like an unspoken question, Heads is mostly about the psychology of imprisonment under particular duress: Halfway through, two of the captives, one in each cell, are told that unless the kidnappers' demands are met, they will be beheaded. The characters react, at various times, with everything from prison-break defiance to groundless hope for rescue and complete collapse.

Lewis’ intelligent dialogue is delivered by a riveting cast, and director John Shepard makes optimal use of what, even in total, is one of the most confined playing areas I’ve ever seen.

Despite that chronically cramped space, and the protagonists’ fates resting with unseen forces, Heads lacks any feel of existential rumination (as dramaturg Kyle Bostian points out in the production’s program notes). Plainly inspired by real events, it’s docudrama-realistic, and Lewis’ vision is far from comforting.

The final performances of Heads take place tomorrow night through Sunday afternoon, at Oakland’s Pittsburgh Playhouse. Tickets are $24-27 and are available here.

Crowdfunding to help an ex-Pittsburgh musician