What do The Flintstones, South Park and Adventure Time all have in common?

Yes, they’re all animated. But more importantly, they’re all descendants of Gertie the Dinosaur, one of the earliest cartoon characters. This Saturday, Toonseum will be throwing a birthday party for Gertie in honor of her 100th birthday. 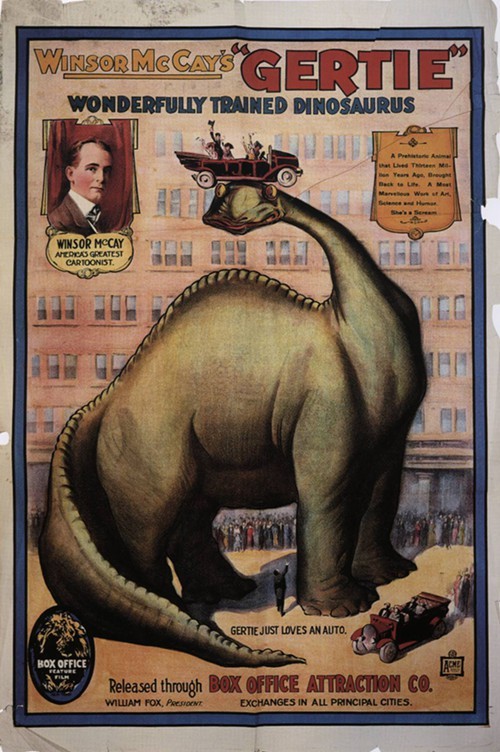 Gertie was a trailblazer in several ways. “It’s the first time in animation that there is a really developed personality for a character,” says Toonseum director Joe Wos. “It is beyond a simple short exercise in animation. There’s a full cartoon with a live stage performance. It’s the first screen dinosaur … It’s the earliest female character in animation.”

Created by master of whimsy and cartooning legend Winsor McKay, Gertie debuted in 1914 as part of a vaudeville act. (That's the original poster at left.) In front of a live audience, McKay would issue "commands" to the on-screen Gertie, who responded in her animated environment by dancing, eating part of her surroundings and draining an entire lake when urged to drink.

Visitors have the chance to see her in action themselves when Toonseum screens Gertie the Dinosaur at 1:15 p.m on Saturday. They’ll also get to see a rare artifact — one of McKay’s original Gertie sketches.

“There’s only a handful of pieces that still exist,” says Wos. “Out of 10,000 drawings, only about 200 exist in the world. Only three are on public display, and Toonseum has one of them.

"[I think people will] be astounded in seeing Gertie [and seeing] how much those basic principles and concepts in animation and character development remain. It’s really a testament to Gertie’s legacy."

In addition to the Gertie-related activities, the museum offers a “How to Toon Quick Class” at 2 p.m. and a “Flip Book Construction Quick Class” at 2:45 p.m. Kids can also see many of the works following Gertie’s footsteps with screenings of other cartoons, shown as part of the museum’s Century of Animation exhibit.