An interactive, projection-based video and sound installation will brighten Market Square for three weeks starting Feb. 21, it was announced yesterday. 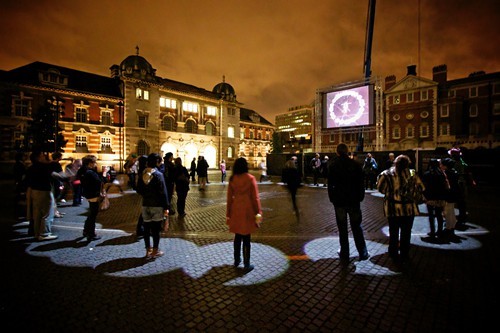 “Congregation” will be the North American debut of work by the internationally famed British artists known as KMA. KMA principals Kit Monkman and Tom Wexler will shortly be in town to set up the extensive rigging.

The exhibit is the first project of the Market Square Public Art Program, a three-year initiative of the City of Pittsburgh Department of City Planning’s Public Art Division and the Pittsburgh Downtown Partnership.

“Congregation” was announced yesterday at a press conference at swank Market Square watering hole Perle, by PDP president Jeremy Waldrup, and Renee Piechocki, of the Office of Public Art.

Also at the press conference was freshly minted Mayor Bill Peduto, who had inadvertently stolen a bit of the event’s thunder by tweeting some video of “Congregation” Piechocki sent him earlier.

Peduto also said he tweeted the words “funky Downtown lighting,” but there’s a bit more to “Congregation” than that. Piechocki said that among the more than 130 submissions the project’s committee fielded, “Congregation” stood out for its “combination of artistic excellence and interaction” plus “a certain wow factor.”

The installation consists of a 50-foot-wide screen and a video projection on a 25-minute loop. The twist is that the projected loop changes based on how audiences react to forms projected on the ground. The images start with a silhouette-like human figure but also include spotlights connected by strips of light, and other abstract shapes.
“Congregation” premiered in Shanghai, China, in 2008 and went on to exhibitions in several sites in the U.K. Included here are images from other installations.

Michael Mitcham, operations director for in-city Primanti Brothers locations including the one in Market Square, said at the press conference that “Congregation” continues the site’s revitalization. Peduto connected “Congregation” to a city’s need for a central gathering place.

“Congregation” will be switched on for the public on Feb. 21, and will run from dusk to 10 p.m. Sundays through Thursdays, and dusk to midnight on Fridays and Saturdays.

The Market Square Public Art Program is backed by funders including The Heinz Endowments, an anonymous donor, the Colcom Foundation, the Richard King Mellon Foundation and the Pittsburgh Downtown Partnership.