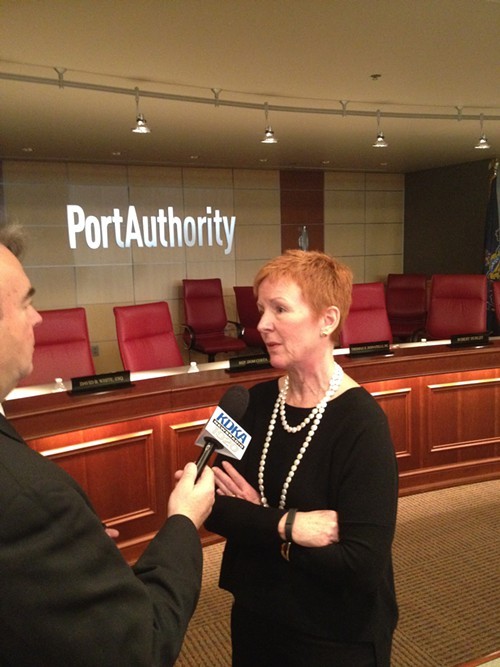 The Port Authority board voted this morning to promote interim CEO Ellen McLean to be its permanent CEO.

That decision appeared to be swayed by McLean's lobbying efforts in Harrisburg, where a transit funding crisis threatened to force the authority to make yet another round of service cuts. (Those cuts were avoided after a multibillion dollar plan narrowly passed in the house, and plenty of political hi jinks.)

"It's a historic moment," McLean said after the board's vote. "We have funding, something we haven't had. It gives you the opportunity to pull a lot of people together and have a conversation about what modern transit looks like for Allegheny County."

McLean said her top priorities are to ensure the long-term financial viability of the system and make service improvements.

"We've been cutting for so long; we know our riders are stuffed in buses at times," she said. McLean did not commit to new routes, though she didn't rule out the possibility either, saying she would have to evaluate once funds from the transit bill start flowing in July.

That means new routes wouldn't be on the table until at least September, McLean said.

She also served during a period in which a state law expanded the Port Authority board, and gave the state legislature and governor control over five of the authority's 11 members.

McLean served as the chief financial officer for the city in the Tom Murphy administration, which is also the title she held at Port Authority before being named interim CEO.

"We've developed a positive relationship with Ellen McLean and County Executive Rich Fitzgerald through the last few years, working on legislation and our last labor agreement," Palonis said in the release.

McLean was offered a three-year contract, at an annual salary of $215,000. That represents a $30,000 increase over Bland's salary, though authority spokesman Jim Ritchie noted the average salary of transit agencies of a similar size is roughly $254,000.

Her appointment will take effect February 1.