At an event hosted by Pittsburgh United at the Hill House Association on Jan. 9, new Mayor Bill Peduto reaffirmed commitments made on the campaign trail and during his many years serving on city council. He pledged to hold developers and businesses who receive government subsidies from public tax dollars accountable, especially when it comes to providing good-paying jobs and investing in the community.

“It really doesn’t make sense to use public dollars to create jobs that will force people to live on public assistance,” Peduto said. 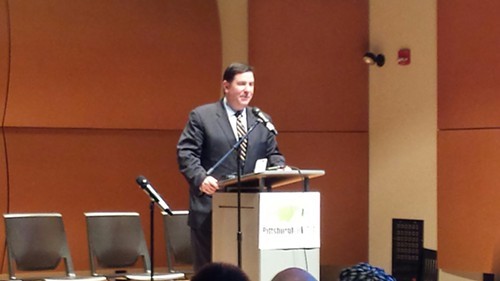 In addition to Peduto, councilors Natalia Rudiak and Daniel Gilman also pledged their support for Pittsburgh United’s mission of growing Pittsburgh’s middle class by increasing wages at some of Pittsburgh’s largest employers. Newly elected council president Bruce Kraus is also on board but was unable to attend.

“I’m so happy so many workers are pushing for stronger jobs and better wages,” said Rudiak. “We will work to ensure publicly funded development will create good jobs.”

The elected officials heard from local unions and workers who highlighted their efforts throughout 2013 to hold Pittsburgh companies accountable. Among them were protests against Walmart and UPMC. Another included fast-food workers rallying for wages of $15 per hour.

“We’ve now got the leadership at the top in council and the mayor’s office to support them,” said Sam Williamson with SEIU 32BJ.