The Erin McClelland campaign, which is trying to mount a challenge to incumbent tea-party Congressman Keith Rothfus, announced this afternoon an endorsement from Vice President Joe Biden.

"Erin McClelland will bring new leadership to Washington, work to create jobs, ensure equal pay for women, and expand access to affordable education," a press release quotes Biden as saying. "The people of Pennsylvania are looking for a change from this reckless Republican Congress, and Erin McClelland will always put the middle class first."

The endorsement probably won't help the McClelland campaign much: As I reported last week, the race doesn't appear to be close, even though the district was among the most competitive in the country in 2012.

What is interesting about the endorsement, though, is what it confirms about Obama's unpopularity in the district. "The McClelland people probably figure that Biden is a better surrogate for them in that district than the president is,” says Kyle Kondik, a Rust Belt native with the University of Virginia Center for Politics.

Still, with just about $50,000 cash on hand compared with Rothfus' $1 million, "Far more valuable than an endorsement [for McClelland] would be the [Democratic Congressional Campaign Committee] putting $2 million into Pittsburgh television," Kondik says.

The endorsement coincides with two new TV ads from team Rothfus, neither of which mention McClelland or the fact that he's running for re-election — another possible indicator Rothfus isn't expecting a strong challenge.

The full release after the jump.

If you're living in the 12th congressional district, you might not know much about the U.S. House candidates you'll have to choose from this November.

Political neophyte Erin McClelland is mounting a challenge to Tea Party incumbent Keith Rothfus, a Republican with a record that includes votes against Superstorm Sandy relief and against re-opening the federal government during last October's shutdown.

Political analysts roundly agree the race isn't competitive — Rothfus has raised $1.7 million to McClelland's $244,660. But the debates — which start tomorrow — could be McClelland's shot at gaining some ground and name recognition (Rothfus' T.V. ads, for instance, don't mention McClelland and she doesn't have the cash to flood the airwaves with ads of her own).

We'll have more about how the district went from being one of the most competitive in the country to being safe for an ultra-conservative like Rothfus in print and online tomorrow. If you live in the district, or just like political theater, you might want to drop by one of the debates.

Here are details for each of the three debates:

Just when it looked like Video of the Week in the Pa. governor’s race would go to Corbett staffer Dennis Roddy, asking a staffer for Democratic challenger Tom Wolf’s Campaign for a Fresh Start “are you carrying any kind of weapon,” comes this commercial from the College Republican National Committee.

The ad is a send-up of the reality show Say Yes To the Dress, where brides-to-be search for that perfect wedding gown. The ad is bound to be a classic because after all, what young girl hasn’t always dreamed of catching that perfect fella, buying the perfect dress and marching on down the aisle?

Besides, if anyone knows how to reach out and relate to women it’s Gov. Tom Corbett, whether on issues of reproductive health or creating a safe work environment where women can prosper!

In the ad, instead of hunting for that perfect gown, some recent college grads are looking for the perfect governor. They desperately want “The Tom Corbett” and not their mother’s expensive and outdated pick, “The Tom Wolf.” After all, Wolf backs outdated ideas like raising the minimum wage and imposing an extraction tax on shale drilling. Here’s the ad:

It is a little strange to think of Tom Corbett as the friend of recent college grads. City Paper has a story this week about how Pittsburgh Public Schools have fared under the governor. Higher-ed spending has also been cut under Corbett.

According to figures from the Pennsylvania State System of Higher Education, Corbett slashed allocations to PASSHE 18 percent in his first budget and has kept it flat-funded since then. State funding per full-time student has also decreased significantly. The numbers are below:

Actor in Wolf commercial did horror flick; shit gets blown way out of proportion

While there have been no shortage of attack ads in recent months in Pennsylvania's gubernatorial race, it has been lacking in one major area: moral outrage.

The story was picked up by major news outlets across the state; the Wolf camp offered a mea culpa and began chopping the actor, Alan Benyak, and his very brief scene from the commercial. "We were unaware of Mr. Benyak's involvement in the film, and we are making changes to the ad now," Wolf spokesman Mark Nicastre told the Philadelphia Daily News. 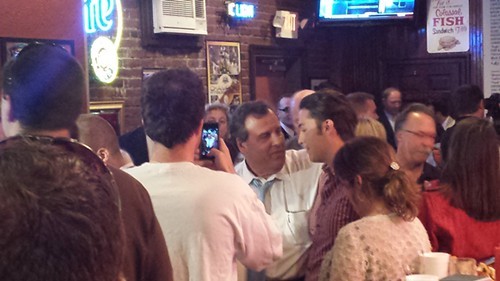 In a press release entitled: "TONE-DEAF TOM BRINGS WORLD’S MOST FAMOUS BRIDGE CLOSER TO THE CITY OF BRIDGES," Mills points out the irony in bringing Christie — who was caught in a political scandalover the political closing of the NY-NJ connecting George Washington Bridge — into the city on a day when the Friday rush is bound to be busier than usual.

"Proving how well-deserved his historically low polling numbers are, Tom Corbett will again show how out of touch he is at a rally today ... featuring GOP/Tea Party NJ Gov. Chris Christie," the release states. "This appearance comes as the city begins its 10-day celebration of the arts with the Three Rivers Arts Festival, the week-long tribute to LGBTQ Pride and Equality, the return of the Pirates as they take on the Brewers for Free Shirt Friday, and other major cultural and community festivities."

“Even worse is the fact that Corbett thinks nothing of bringing his anti-LGBTQ message to the very spot where just a few hours earlier our city launched our annual tribute to our sisters and brothers, mothers and fathers, sons and daughters, and friends and neighbors who are lesbian, gay, bi-sexual, and transgender,” Mills said. “Corbett famously insulted our citizens calling marriage equality like brother marrying sister, and now he is insulting them — and us — again."

The full release appears after the jump and we'll have an update of the Christie/Corbett visit in this space later. I'll also be live tweeting the event here: @charliedee71

Wolf to get SEIU endorsement Friday

Tom Wolf will big up his first big post-Primary endorsement Friday morning when he receives the backing of the Pennsylvania State Council of the Service Employees International Union (SEIU).

The announcement will take place at 10:30 a.m. in Philadelphia when “Plans will be announced to devote significant resources to Wolf’s election efforts, including hundreds of ‘boots on the ground’ by SEIU member volunteers.”

Despite incumbent Republican Tom Corbett picking up a couple of labor endorsements in the past couple weeks, this announcement comes with little shock.

According to a Quinnipiac University poll released yesterday, Wolf is way out in front of Corbett by 20 points.

Editor's Note: An earlier version of this story incorrectly reported that SEIU endorsed candidate Rob McCord in the May 20 Primary

Tom Corbett has secured his second labor endorsement of the 2014 General election, this time from the Allegheny County’s Boilermakers Local 154. He received the endorsement of the Laborer's District Council of Western Pennsylvania last month.

“Since taking office, Governor Tom Corbett has kept his promise to fight for Pennsylvania jobs, making our Commonwealth stronger and more prosperous for our members, their families and all Pennsylvanians,” Boilermaker business manager Raymond Ventrone said in a Corbett-issued press release. “We look forward to what the next four years of Governor Corbett’s leadership will hold for Pennsylvania’s future and are proud to stand with him as he seeks re-election this November.”

The move isn’t a total shock. The coal plant union endorsed Corbett in 2010 over Democratic candidate Dan Onorato. Wolf also campaigned on the need for alternative energy and Corbett has wasted no time trying to tie Democratic challenger Tom Wolf to the “war on coal” that everyone else has been tying to President Obama.

Corbett has come out swinging at Wolf since the May 20 primary in an effort to cut into the lead Wolf has on the incumbent. He has hit Wolf on coal, and accused the York County millionaire of buying the Democratic nomination. He also softened his previous position on medical marijuana, decided not to appeal a federal decision to allow same-sex marriage and has formed a tax force to try and settle the UPMC/Highmark dispute.

And it’s likely just the beginning if he hopes to avoid becoming the first sitting governor not to be re-elected since the state in 1968 changed its laws to allow a governor to serve two consecutive terms. A Quinnipiac poll released today has Corbett a 20-point underdog to Wolf, 53-33 percent. According to a press release from the university, “only 23 percent of voters say they and their families are ‘better off’ than they were four years ago, while 27 percent say they are ‘worse off,’ with 49 percent who say they are ‘about the same.’”

"The election is five months away, but Pennsylvania Gov. Tom Corbett looks like easy prey for Democratic challenger Tom Wolf," said Tim Malloy, assistant director of the Quinnipiac University Poll in the release. "When only 23 percent of the electorate says their families are better off now than they were four years ago, the crisis of confidence reverberates through the State House."

As a wise man once said: History repeats itself first as tragedy, then as farce, and finally as a campaign advertisement. For proof, I refer you to the primary race between Democratic state House representatives Harry Readshaw and Erin Molchany, where the two sides are pounding away on a small set of by-now familiar themes.

Readshaw begins his new ad by charging that "Erin Molchany's attacks on Harry Readshaw [are] a bunch of malarkey." (The footage used to illustrate the point is not actually a Molchany attack, per se — it was aired by the group Keystone Progress. As I've noted elsewhere, outside groups — namely Keystone Progress and Planned Parenthood — have done a lot of the heavy lifting on Molchany's behalf.)

Readshaw then turns the attack on his rival, claiming that Readshaw won the Allegheny County Democratic Committee endorsement "because he blasted Corbett's radical agenda." The ad contends that Molchany, by contrast, was "rejected by our Democratic Party because she's Corbett's gas-tax partner" — one who allegedly voted for "over 140 tax hikes and fees."

Anti-Wolf mailer raises question: Why do Republicans hate capitalism so much?

Here's something you may not have expected to see in this year's gubernatorial campaign: a state Republican Party mailer that echoes Democrats Allyson Schwartz and Rob McCord, criticizes the practices of successful businesspeople ... and defends our public-sector unions.

A sharp-eyed correspondent in Pittsburgh's East End forwarded us a mailer faulting Democratic frontrunner Tom Wolf's business practices. Headlined "A Wolf raided Pennsylvania's pension fund," the mailer decries Wolf's business record as "a story all too familiar" — in which "wealthy corporate titans pocket millions in leveraged buyouts, while the average middle-class taxpayer gets fleeced." (See below for a reprint of the mailer.)