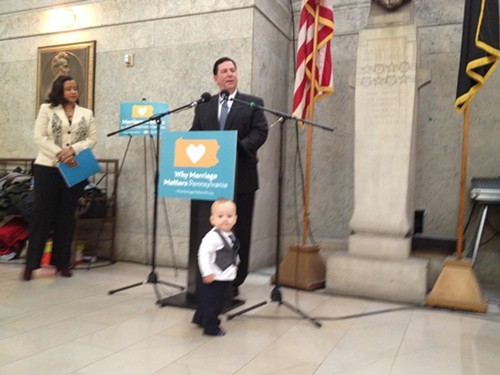 In an effort to increase visibility for marriage equality, and its lawsuit seeking to overturn Pennsylvania's same-sex marriage ban, the state ACLU launched its "Why Marriage Matters" campaign this morning.

"We are like a lot of families," says Diana Polson, a plaintiff in the case. "We sit around the dinner table and share interesting pieces of our day, we have dance parties in our living room, we hike together on a snowy day [...] we know we represent just one of the thousands of love stories in Pennsylvania."

Peduto likened Pennsylvania's place in history to the South during desegregation. "I don't want us to be looked back [on] like we look back on the South and the civil rights movement," he says. "I don't want Pennsylvania to be the 50th state to finally understand that rights should be given to everyone."

Fetterman, the shorts-wearing Braddock mayor who has been marrying same-sex couples, spoke of those ceremonies. "The sense of relief that pours over both of their faces is powerful," Fetterman says of the marriages. And to those who think what he's doing is wrong: "You have to look deep inside yourself."

Vote on Produce Terminal delayed ... but not before Burgess drops a reference to apartheid