More than 100 braved the cold outside Gov. Tom Corbett’s Downtown Pittsburgh office Dec. 9 to protest cuts to public education. The demonstration coincided with similar events in more than 60 cities around the country as part of the National Day of Action.

“I want to go into education,” said Mayah El-Dehaibi, a senior at CAPA High School. “But the more I hear about what’s going on in our schools, the more I question.” 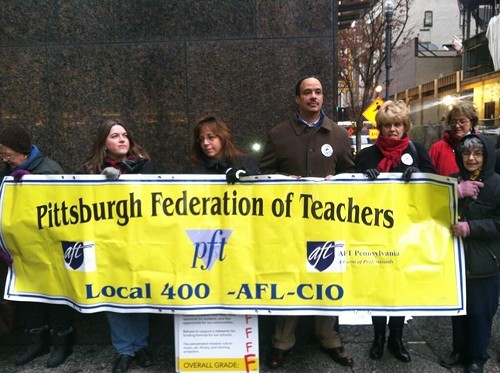 The local group of protestors was made up of the Pittsburgh Federation of Teachers; Great Public Schools Pittsburgh, a community activist coalition; as well as parents, and students from the Westinghouse High School marching band. They called on Gov. Corbett to restore the more than more than $2.4 billion he has cut from public education funding.

“Our kids have lost kindergarten, music [and] art” said Jessie Ramey, a partner in GPS. “We want smaller class sizes…we want our librarians back.”

They also demanded the governor implement a “fair funding formula” for districts throughout the state. An education funding formula could take into account factors such as a district’s student population and poverty levels, and allocate additional resources to struggling districts.