Last week for True West at the Public | Blogh

Although it centers on the fraught, raucously funny relationship between two brothers, on another level Sam Shepard’s contemporary classic probes our national mythology. 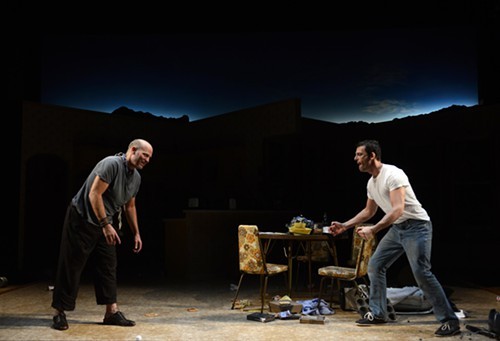 The terrain is desert ground east of Los Angeles, where the brothers — one house-sitting, one crashing — are staying at the home of their mother. The ever-present mountain scenery looming behind Michael Schweikardt’s note-perfect mid-century suburban-American kitchen-and-dining-room set reminds us this used to be the frontier. (That Mom’s on vacation in another former and even more distant frontier, Alaska, only drives the point home.)

The brothers squabble, perhaps most basically, about their authenticity. Hollywood insider Austin is working on a screenplay; drifter and thief Lee says he can write one, too. And the fact that Lee’s story is full (to Austin’s mind) of the rankest Western cliches, we learn, doesn’t necessarily mean it won’t sell.

Is family man Austin the truer citizen? Or is Lee’s form of self-sufficiency — burglary — just as authentic, especially given his apparent ability to live alone in the desert? Somewhere in the background, the soundtracks to 500 cowboy movies swell.

Historians debate how much the American character was formed by a belief in the frontier — its values, its justice, all now heavily mythologized. But perhaps what became most significant about the Western frontier, starting around 1890, is that there just wasn’t any more of it. In this fine production directed by Pamela Berlin, the brothers have nothing left to face but the the unknown terrain in each other.

True West has eight more performances at the O’Reilly Theater through this Sunday, starting tonight. Tickets are $15.75-55.