Corbett Campaign Kicks Off in Pittsburgh 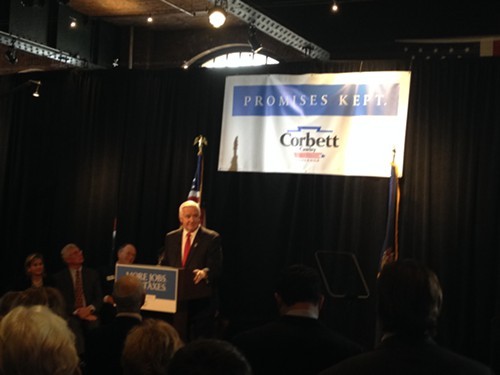 Under a cloud of abysmal approval ratings and news cycles repeating his analogy of gay marriage to incest, Gov. Tom Corbett announced his re-election campaign by arguing he has kept his promises and never intended to govern by the polls.

If you're looking for someone who "allows the latest poll to drive decisions, I'm not your candidate," Corbett told a crowd of supporters at the John Heinz History Center Wednesday morning.

Making the state more business friendly to spur job growth (especially in the natural gas industry), keeping taxes down and reducing state spending were all on the agenda in the first campaign: "More jobs, less taxes," Corbett echoed as his message from his first term. "Today, we're adding one more line: promises kept."

And while everyone from his wife to his lieutenant governor talked about his political consistency, he's facing an unhappy electorate.

Just 19 percent of registered Pennsylvania voters think Corbett is doing an "excellent" or "good" job, significantly below where former Govs. Tom Ridge and Ed Rendell were at similar points in their first terms. That's according to a recent Franklin & Marshall College poll, which also showed only about a third of Republicans view his job performance favorably (and only slightly more think he deserves re-election).

Democrats and representatives from the Pittsburgh Federation of Teachers, who protested outside the event, were quick to pounce on the opportunity to do what hasn't been possible in Pennsylvania in modern political memory: unseat a sitting governor.

"Today, Tom Corbett announced his re-election campaign to the great dismay of Republican leaders throughout the state who were hoping a real leader would replace Corbett," wrote Marc Eisenstein, a Democratic party spokesman. "Our Commonwealth has been held back by Tom Corbett's broken promises, outrageous and offensive comments, and egregious ethics violations. Pennsylvania deserves a governor who will work for them and will make them proud - something that we have not been able to do since January 2011."

On education funding, an issue that school boards often criticize the governor for, he largely blamed districts for failing to appropriately use federal stimulus money.

That drew criticism from Pittsburgh Federation of Teachers' president Nina Esposito-Visgiti, who protested outside.

"Regardless of where the funding is coming from, Governor Corbett has consistently not made public education a priority," she says. "He's not a shepard of his flock."

Congratulations Brian Sims, you have won the Internet