A local social-justice group yesterday announced its push to get local institutions to stop investing in fossil fuels. And it had company: the world’s best-known proponent of such disinvestment. 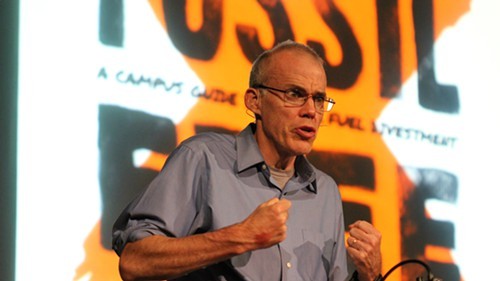 Bill McKibben, founder of climate group 350.org, had stopped in Pittsburgh after returning from Europe, where he sought to persuade cities to pursue disinvestment. He was here to receive the Thomas Merton Award from Pittsburgh’s Thomas Merton Center, which plans to start gathering signatures on petitions asking Pittsburgh City Council to disinvest.

At an afternoon press conference at Station Square, McKibben touted the rapid growth of the disinvestment movement. It began only about a year ago, but McKibben says it is now active on the campuses of 380 colleges and universities. “Eight or nine” colleges have agreed to stop investing in fossil-fuel companies, and cities including Seattle, Portland, San Francisco and Providence, R.I., have taken the pledge, he said. So has at least onemainline church.

As he spoke, McKibben was surrounded by local activistsholding up banners for the Sierra Club and anti-fracking groups including marcellusprotest.org.

“There is no issue more critical than climate change,” said Wanda Guthrie, chair of the Thomas Merton Center Environmental Justice Committee, in a statement. “The state of our planet’s climate affects every other issue, including peace, justice, economic development, civil rights and more. Divestment from fossil fuels, although a little late, is a good way to begin to address this critical issue.”

Guthrie said that the Merton Center will begin circulating disinvestment petitions it plans to present to Pittsburgh City Council in January, after a new mayor and new councilors are seated. The Center will also be approaching universities and “all those well-endowed churches that we have in Pittsburgh!” she said, laughing. The push at universities will be led in part by the Sierra Student Coalition.

The Merton Center, the Sierra Student Coalition, 350.org and other groups will ask the City of Pittsburgh to immediately freeze any new investments in fossil fuels and to divest from direct ownership and any commingled funds that include fossil fuel public equities and corporate bonds within five years.

McKibben is an author and a professor at Vermont’s Middlebury College, but is best known these days for 350.org. The group, active internationally, is committed to returning atmospheric concentrations of carbon dioxide to 350 parts per million, the level scientists say is necessary for a stable climate. (The level hit 400 parts per million earlier this year.)

The disinvestment movement is modeled on the anti-apartheid movement of the 1980s, when activists persuaded many schools to stop investing in the South African regime. The idea here is to raise awareness about the dangers of climate change and the need to move to a clean-energy economy.

Asked how much disinvestment in oil, gas and coal companies is needed to turn the tide, McKibben responded: “The goal is not to bankrupt Exxon. … The goal is to politically bankrupt them.” Just as South Africa’s government was deligitimized among nations, he said, “We have to be able to start to weaken the political stranglehold” that fossil-fuel interests have in Washington, D.C.

McKibben added that as the effects of climate change worsen, governments will inevitably move to curb fossil-fuel use, reducing demand for the products of the companies disinvestment targets. Thus disinvestment now could also be seen a smart business, he argues: “It’s clear that these are no longer wise investments.”

Some critics question whether disinvestment will work. After all, the target isn’t one smallish African nation — it’s the industry whose products have laid the foundation for modern global civilization. Universities including Harvard have already proven deeply resistant to disinvestment.

Some, including at least one prominent climatologist, have suggested that rather than chip away at corporate monoliths, we should be making political targets of the relatively small number of U.S. senators and congresspeople who’ve stood in the way of a carbon tax and other fundamental approaches to cutting back on our emissions of greenhouse gasses.

But McKibben believes we need efforts on all fronts, not just electoral politics. “We don’t stop working just because elections aren’t underway,” he said, “a nd we don’t have that much time.”

McKibben noted that we appear to be at the beginning of the melting of the permafrost in Arctic and sub-Arctic regions of places like Russia and Canada. That would mean huge releases of methane, a greenhouse gas 20 times as potent as carbon dioxide, and would have very serious consequences climatically.

He was asked whether he is optimistic about the fight against climate change.

“I’ve sort of given up asking myself that question,” he said. That’s partly, he said, because he’s afraid how he would answer, and partly because the answer depends “enitrely on how much resistance we can muster” to fossil-fuel use.

“It’s definitely a race, and we’re definitelylosing the race,” said McKibben. But “[w]e’re also picking up the pace.”