School board approves Teach for America contract, but there's a catch

Last night, the Pittsburgh Public School District board of directors voted by a vote of 6-3 to approve a three year contract with Teach for America, a nonprofit organization that recruits college graduates and professionals to teach in low-income schools. But the contract might not be a done deal.

After attempting to table a vote on the TFA contract, school board member Mark Brentley, who was against the contract, voted in favor of it. As a result, Brentley has a chance to defeat the measure by bringing it up for a vote again when a new crop of board members is sworn in less than two weeks from now.

“Let’s table it; let’s bring it up at another date when the community’s involved,” said Brentley prior to the vote. “It’s controversial and it’s divisive.”

School solicitor Ira Weiss said he doesn't anticipate the district moving forward with the TFA contract because of the controversy.

"Given the discussion at the table, given the statements of several board members, good judgement would dictate that we wait until December," Weiss said.

The district’s proposal to contract with TFA has been met with some resistance from the community. At a public hearing on Nov. 25 and a rally preceding the vote, a group of teachers, parents and community organizers asked the district to postpone deliberation on the contract until four new board members take office in December.

“It really bothers me that they’re taking away the democratic process by trying to push these things through tonight,” said Debra Srogi, a PPS parent, an hour before the board’s vote.

Long time school board members Theresa Colaizzi and Jean Fink took offense to those who referred to them as “lame ducks” and said the outgoing board members shouldn’t be voting on controversial issues at the last meeting of their term.

“I walked into this with a table of controversial issues and I don’t see one this last one should be any different,” said Fink who has served on the board for 37 consecutive years.

However, even the outgoing board members disagreed on whether or not the district should contract with TFA.

Fink sided with those in opposition who accused TFA teachers of being unqualified.

“The district has been saying for years that every student needs a highly qualified teacher and I agree,” said Ellen Smith, a retired PPS teacher who criticized the minimal classroom experience TFA teachers receive. “So the notion that somebody can come into a classroom with five weeks of training—I look back at what I didn’t know those first two years. I feel like these Teach For America teachers might be very well educated, very bright, but they’re not well prepared.”

The contract would allow the district to hire up to 30 TFA teachers next fall.

The World Cafe features interviews and music from all around the country and the world — but on Wed., Dec. 11, it'll be all about Pittsburgh.

The syndicated music-and-talk show, which airs at 6 p.m. weekdays on WYEP locally, will feature a pre-recorded live set and interview with local faves Donora, a trip to Jerry's Records, some history talk with local soul legend Billy Price and a segment with WYEP Morning Mix host Cindy Howes.

Hill District residents are, once again, battling with Pittsburgh Penguins management and developers of the former Civic Arena site -- this time over the amount of affordable housing proposed for the lower Hill District development.

The community wants 30 percent of the residential development to be affordable housing, but at a Nov. 21 community meeting, the plan unveiled by developer McCormack Baron Salazar only included 20 percent.

The plan could be taken to the City Planning Commission as early as next week: The meeting, organized by the Penguins, was meant to show the community what that proposal will look like.

“If this is going to be successful we’re going to need to work with the community,” said Travis Williams, chief operating officer for the Penguins.

“It seems like you’re slow-walking us through this presentation, but you’re taking your plan to the planning commission next week,” said Carl Redwood from the Hill District Consensus Group.

Know a teen or two who write their own songs and could use some exposure? A new program from Reimagine Media — an educational wing of WYEP — might be the place for them.

Reimagination 2014 is a project in which WYEP will match young musicians with professional producers so they can record their music and end up with a track on a compilation CD that the program will release. Participants will also have opportunities to perform live at events including the Three Rivers Arts Festival as well.

The kids have to write their own stuff, of course, and have to be age 13-19. Details here.

Charles Wallace is an instrumental group that plays jazz versions of popular songs. The group released a new album titled Mariposa this year that includes both original compositions and jazz versions of songs like Radiohead's "Nude" and Neil Young's "After the Gold Rush." Today's MP3 is a song from that album called "Don't Ask." Stream the track below and check out more information and music at www.charleswallacemusic.com.

Friday deadline to comment on hauling frack waste on rivers

The U.S. Coast Guard is accepting comments through Fri., Nov. 29, on a proposal to permit the hauling of shale-gas extraction waste via river barges.

Much of the waste would come from Pennsylvania and its Marcellus Shale gas fields. The waste is currently transported from drilling sites to disposal facilities by truck and rail.

Fracking waste is known to contain toxic chemicals like benzene and radioactive materials. And because of trade-secret privileges, industry has not revealed many of the chemicals in the fracking fluid to the public.

It's an intriguing play by one of the hottest English-language playwrights of the moment, cleverly staged in an old chain burger place in the Waterfront.

Despite his acclaim, British playwright Jez Butterworth hasn't had too much exposure in these parts — previously, to my knowledge, just a 2009 Point Park REP production of his first play, the gangster drama Mojo .

The three-character Parlour Song indeed suggests a playwright worth more time on local stages. It's a funny, insinuating and ultimately quite sad portrait of suburban loneliness, the quiet (or noisy) desperation we attempt to paper over with cheerful grins, fitness schemes, work and possessions.

Organizing metaphor: All of protagonist Ned's stuff is disappearing, each birdbath by stuffed badger. Thus does Butterworth take his characters into existential terrain without every brushing against pretense.

Butterworth is also said to be writing the script for a feature film about The Clash.

Here's Colette Newby's review of Parlour Song for CP. Of particular note is the show's staging in an old Pittsburgh Burger Company restaurant, the paneled half-walls and such eerily echoing any shoddy new subdivision you care to name. 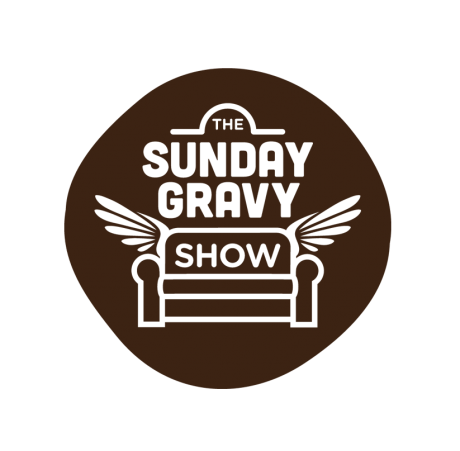 A new series from the Pittsburgh Folk Music Society premieres this weekend. The Sunday Gravy Show is a part-gameshow, part-concert house party that is hosted by Wammo, a recording artist and co-founder of The Asylum Street Spankers. Each month, the concert will be held in a different Pittsburgh neighborhood and will feature internationally touring artists and musicians.

This weekend's premiere show will be held in Lawrenceville and will feature Frank Orrall of Poi Dog Pondering and Thievery Corporation. The exact location of the show is only disclosed to ticket holders, but the concert will be held in someone's living room and is limited to 50 seats. The show is on Sunday, Nov. 24 starting at 4 p.m.

You can find more information and get tickets for The Sunday Gravy Show — which is sponsored by the Sprout Fund and in partnership with Calliope, a nonprofit music organization that organizes concert series and educational outreach programs — online at calliopehouse.org/sunday-gravy.

If you’re looking for further commemoration of the 50th anniversary of the JFK assassination, and don’t mind braving Light Up Night traffic, Prime Stage Theatre has an event for you.

The Kennedy Legacy is a short program of readings of excerpts from some of JFK’s key speeches, performed by local actors. Dek Ingraham directs.

There will also be audience discussion by folks who remember where they were on Nov. 22, 1963.

The reading’s at Max’s Allegheny Tavern, on the North Side. It starts with hors d’oeuvres at 7 p.m.

Max’s is at 537 Suismon St. Tickets are $15 and available in advance only at www.primestage.com.

Why hasn’t someone thought of this before? Raising funds for typhoon victims by teaching people how to kick butt.

There is no minimum suggested donation, but all proceeds will be given to the American Red Cross Typhoon Appeal Cause.

The class will be taught by Master Zach Whitson, who is a student of Grandmaster Cacoy Canete, a Filipino working in the relief effort overseas. The two are pictured. Whitson is founder of the Counterpoint Tactical System affiliate of martial-arts studios.

The workshop is open to anyone 13 and up.

Filipino martial arts is known for its heritage of stick fighting, as pictured, as well as other weaponry.

“This workshop will be a wonderful way to help the Filipino people in this time of great need as well as immerse yourself into the martial history and warrior culture of the Philippines,” says Ryer Academy owner Joshua Ryer in a statement.

Similar fund-raising workshops are being held at martial-arts studios in several other cities across the U.S.