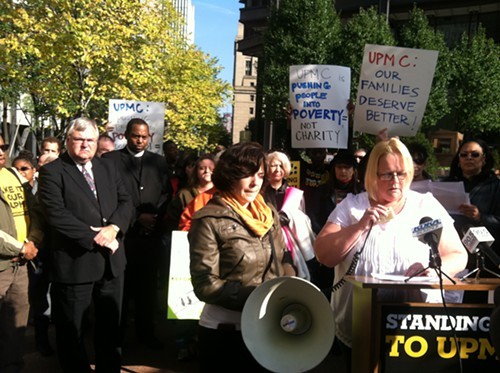 Dozens gathered at the U.S. Steel Tower earlier today to condemn UPMC for outsourcing its medical transcription jobs. This month, the displaced workers, now employed by Massachusetts-based Nuance, received their first paychecks, which were greatly reduced by as much as 60 percent from their take home pay at UPMC.

“What UPMC has done to these transcriptionists is wrong,” said Pastor Eric McIntosh from St. James Episcopal Church in Penn Hills.

The former UPMC transcriptionists were notified in May that their jobs would be moved to Nuance. While many were able to keep their jobs by switching to the new company, their pay was changed from hourly, to a rate based on how much work they complete. Ironically, they also lost their UPMC health insurance and say they are paying higher premiums and deductibles with their new insurance plan under Blue Cross Blue Shield of Massachusetts.

In addition to decreased wages, the transcriptionists at the rally complained of increased stress.

“We have lost our security and most of all, we have lost respect for UPMC,” said transcriptionist Veronica Smith.

Live and Local War of the Worlds on Radio Tonight