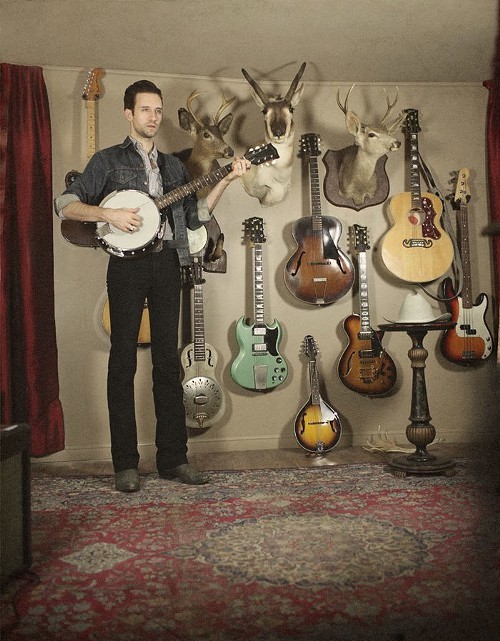 Brett Detar grew up in Greensburg and came of age in hardcore band Zao and emo outfit The Juliana Theory. More recently, he's been writing soundtrack music and solo work that's more in the vein of Americana; he answered some questions for CP via email on a day off from his current tour, which comes to Thunderbird Cafe on Sun., Oct. 27. The show starts at 9:30 and Gypsy and His Band of Ghosts and Joseph West open.

Pittsburgh-area folks know you for some heavier bands — what made you pick up the acoustic guitar a few years ago?
My two solo records are very rootsy country/folk/Americana stuff. I've been heavily into that music for at least 10 years now. I recall the last few Juliana Theory tours - me wearing Waylon Jennings shirts on stage and blasting Loretta Lynn and Gram Parsons in the van in 2004. I've never been one to limit myself to a few styles of music. Zao to The Juliana Theory was a pretty big stylistic jump, as was TJT to my solo stuff, as is my solo stuff to the film-composing work I do that sounds like none of the above. Haha. Maybe I just get bored easily. As for picking up the acoustic guitar - that's always been my go-to instrument since the beginning of my songwriting days. I've written more songs on an old acoustic that I bought in New Kensington in 1993 than probably every other instrument I own combined, so not much has changed in that regard.

As an established artist, how did you come to the decision to issue your latest solo album as a free download?
I've released both solo records on vinyl LP, CD, and free download at my website. I like to make it very easy for people to get the music however they want. Lots of people pay for the music in both the physical formats and at iTunes and Bandcamp, etc., but I also know that a lot of people will search out how to download the record for free at some torrent site or something, and I'd rather them come and get it straight from me. I sell CDs for name-your-own-price on tour and more than anything else I just want people to have the music - to spend time with it - and hopefully be moved by it, so I'm honestly happy to let people download it for free from http://brettdetar.com.

How has your approach to touring changed, over the years, and through your several bands?
Touring as a solo guy is a lot different than touring with a band because there aren't 10 guys to wait for on a smoke break or their cellphones at every truckstop! It's also a lot easier to pick where we eat when there's only 2 people in the vehicle. Picking food stops in a big band always meant someone would be let down. Ha. As for my approach to playing shows as a solo guy, I've really been enjoying stripping down songs to just my voice and either a banjo or a guitar. It doesn't allow you to hide behind walls of guitars and loud drums. I have to be more engaging, sing better, and pick a more engaging set-list than I ever had to in the past. It demands a much higher level of performance. I think it gets much more to the heart of a song than any other touring I've done - and songs are more important to me than anything else in music. Stylistically, a lot of "ex-punkrock-band-lead-singers" go out and play solo shows where they essentially play their old band's songs in the same basic way but "unplugged" on an acoustic guitar, or they play relatively the same style of music their band was known for but just do that on an acoustic guitar instead of in front of a band. That's totally cool and I understand why a lot of guys do that. I'm not slagging on that vibe, but I'm taking what might be the road less traveled. I've never played any songs from my old bands, and I don't play stuff that really feels much like anything I've been known for in the past. I'm playing pretty much straight-up country and folk music on banjo and guitar. It's fingerpicking and pretty mellow and I'm singing with my real voice and singing much better than I have at any other point. I've been really enjoying it. Oh, and the other big difference is sound checks are much shorter, and there's no one in the band to get mad at me if the singer has a bad show!

What keeps you in L.A. these days, and what do you miss about Pittsburgh/Greensburg?
Lately I've been doing a lot of film-scoring - composing all the music for movies - so it's mighty helpful to be near Hollywood for that stuff. I'm also a sucker for sunshine. Being a kid in Greensburg, I was always happiest when it was super sunny outside and you know as well as I do that those days are something you gotta wait for around here. I'm a bit spoiled now having sun pretty much every day. I miss a lot of things about home - my family and friends of course - and Penguins games. Those are way up there. I miss the pizza and Italian food too. I've done a lot of traveling in my life and there's nowhere in America (NYC included) that holds a candle to the pizza in Western PA. Seriously, it's the best. No matter where I end up I always take with me a bunch of things that have been formed in me by the greater Pittsburgh area - particularly my work ethic and can-do attitude. The 'Burgh taught me that if I work hard enough I can figure almost anything out. You can take the boy out of Pittsburgh but you can't take Pittsburgh out of me.

What are you listening to in the tour van this time around?
Well, first off I'm touring in a car like, the classics used to do in the old days - Hank Williams and Cash and Elvis and all those guys started off touring in cars, which is kinda amazing to think about. It's only me and a couple instruments and my buddy Joseph West, who's also playing the Pittsburgh show, and we're skinny guys, so there's no need for a van. Haha. That being said, I've been listening to a lot of talk radio, Pens games and ironically enough - really heavy stuff like Trap Them and Doomriders. My go-to standby is always my favorite XM radio station, Willie Nelson's Roadhouse, which plays nothing but classic country. Good stuff.