I talked with rock singer-songwriter Ezra Furman on the phone on the first day of his current tour, which comes to Club Cafe tomorrow (Thu., Oct. 17). An abridged version of this interview appears in today's paper, but I wanted to share the longer version here. Furman originally recorded and toured with a band called Ezra Furman and the Harpoons; that band broke up, and since then he's built a band called The Boy-Friends. 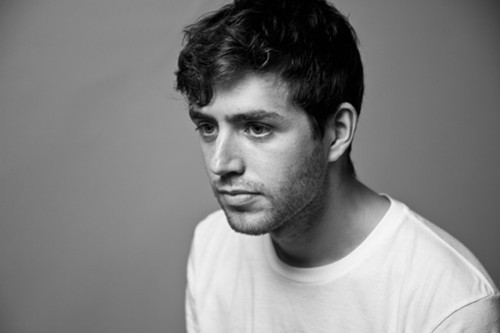 This is the first record with the new band, right?
Yeah, that’s right. I don’t know — it’s still officially under the name Ezra Furman; I’d like to be like Elvis, or Paul Simon. A record’s a record, and it’s my voice always. But this record is indelibly marked by The Boy-Friends. Basically, this band formed to tour in support of the last album, and turned out to be a really good band.

Did you write knowing that this was the band that would record it — did you write for this ensemble?
Really, when I’m writing, I try to avoid all forethought about what’s going to have to happen to bring the song to live, because it’s just a distraction. It’s just logistical information a lot of the time. I like to write with unbounded possibility.

So it’s just you and a guitar to start?
Pretty much. Yeah. I did know that I wanted to make more of an upper-cut of a record, that’s really, has a lot of manic energy.

It seems like a lot of people in the past have referred to you as “folk rock,” which I’m not sure I would’ve even said at the time, though I know where they were coming from. But this album especially doesn’t seem to fit in that frame of reference. Do you think that descriptor used to fit, and doesn’t anymore?
I don’t think it ever really fit. I think of The Byrds and stuff; that’s folk-rock. I never sounded anything like that. I don’t know; there’s the occasional acoustic guitar or harmonica. People are looking for something to hang their hat on. I call it rock ‘n’ roll. I don’t know. I wouldn’t even want to insist on that term, though.

I think when music comes from a single, lyric-oriented songwriter and it’s written for guitar and voice, people want to call that folk-rock.
It’s funny, because all you have to do is listen to the music, and you don’t need any shorthand anymore. That’s what it sounds like. But I know it’s harder to write about without those little tag-words. But … you shouldn’t have it so easy, music journalists! You’re trying to dance about architecture here; it’s complex!

The saxophone is really important on this recording. Why did you go with that? That’s not totally conventional for a rock band.
Sitting almost directly behind me is Timothy Sandusky, who recorded these past two albums at Studio Ballistica, which was, until recently, at the top of a house that I used to live in. He also plays the saxophone. I don’t know how I began to seize on the idea that it was absolutely necessary to have a lot of saxophone on this record. I think it’s because I was listening to a lot of early rock ‘n’ roll. Saxophone players seem like they were almost a required thing in early rock n roll bands; there were lots of saxophone solos, in the way that every band has guitar solos nowadays. I guess just being around Tim and realizing that he could play the instrument. I don’t know where this shit comes from. I just know it’s all necessary.

The liner of this album has an index of topics and thematic ideas. I don’t know if I’ve ever seen anyone else do that.
Yeah, I never saw that done either. I was just trying to think about what I’d want. If I open up a record, what would be most interesting to me. And also I’m involved with a woman who’s studying political theory, and she was comparing all these different indices of books she was reading. I realized that index-writing, it’s like writing an editorial. It’s not at all impartial. And also there’s a lot of little — there’s always been little shards of other things that are in my music, and I think that’s true of everybody. You have all these shards of stuff you’ve taken in, and they make their way in. That was the way to reference some of those.

Is that kind of explication important to you? Some songwriters want their music to be more obscure.
I think I like for there to be a way to find out. Even if it’s not specifically explained all the time. I like there to be the possibility for some detective work, for people who are into that kind of thing. I am, and I do lots of detective work with the records I like. And it’s nice when they give you hints.

Why specifically the mention of Psalm 82? Why did that one relate to a few different songs?
Well … you’re now testing my commitment to slight obscurity. There’s that song “Walk On In Darkness,” that came from reading certain interpretations of Psalm 82. I was reading Maimonides, the medieval Jewish philosopher, and he has this whole thing about this line in Psalm 82, “They know not/ They will not understand/ They walk on in darkness.” And his take on it is, most people never see even a glimmer of the truth. Most of us are just in the dark our whole lives. Then some people see the reflection off a shiny item of the light of the truth. Then there are some people who see, like, a full flash of lightning. Then there are some people who see so many flashes like that, it’s almost like they live in the daylight. And that was a reaction to that. If everybody’s in the dark, shouldn’t our sympathy lie with all of us who will never understand any of it? That’s what caused that thought process. Trapped in the darkness, and some kind of wild-eyed embrace of it. ‘Cause that’s the way I live! I don’t know anything about anything.

In a couple spots in the liner you refer to your Judaism — how do you relate that to your music?
It’s where I come from, and kind of … I don’t know, me, personally, I think I have some bad dispositions. And my upbringing has saved me from a life of total debauchery. It’s only semi-debauched now. I accept everybody’s different approaches to religion — rejection of it, whatever, it’s your own thing you have to decide. For me, I think I’d be a lot worse off without it. And also, it’s given me most of the thought that’s led me to do my best work as a songwriter. I use Biblical imagery, and ideas from Jewish thought, and all these moral challenges that are all over my music. My Jewish thought is one of my largest influences, in a million ways.

You’re clearly a lyrically oriented songwriter. Are you writing words before you write the music to go with them?
I try to write good stuff down when I think of it. I’ve got reserves of lines that might come in handy. Notebooks and documents. There’s shards of potential lyrics all around me. Like a bunch of broken glass. And when I need it, I dip into one of those reserves. And a lot of times, they just appear when they’re needed.