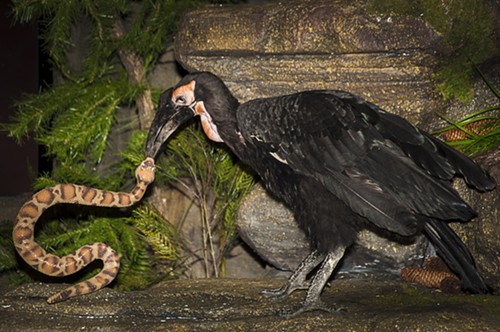 Tomorrow is the premier of Beaks!, the new theater show at the National Aviary. Cathy Schlott, manager of animal training, describes the show as “edutainment.”

The educational component demonstrates the varied functions of beaks in the wild. Through a series of demonstrations narrated by a trainer, the show highlights the “uniqueness of beaks as multifunctional tools,” says Robin Weber, the Aviary's director of marketing.

The show starts when the lights dim in the Helen M. Schmidt FliteZone Theater. On the stage, trees, shrubbery and rock structures stand in front of a big screen.

After a brief video slideshow of bird glamor shots, two parrots fly in from either side of the screen, just barely clearing the heads of the audience, for a dramatic start.

For the parrot obstacle course race, the William Tell overture plays; the southern ground hornbill struts on stage to the crooning of Ella Fitzgerald.

The screen flashes with footage of the birds in the wild as they mirror the beak behavior on stage. Two flamingos use their filter mechanism to eat feed from a Tupperware container full of water. The southern ground hornbill knocks a rubber snake against a rock and a trumpeter hornbill uses its beak to catch a grape, midflight. The show also features several varieties of parrot, a hawk and a hamerkop.

Through Labor Day, the show runs daily at noon. Tickets are $4 (on top of the price of admission). Starting Sept. 3, the show costs $5 and runs twice daily, at 11 a.m. and 3 p.m. through Jan. 1. For more information, visit aviary.org.

If you're a film fan and you've got no plans for this holiday weekend, you might want to spend it cleaning out your DVR, because Turner Classic Movies is about to blow your mind.

To celebrate its 20th anniversary, the cable channel is running a 15-week series, The Story of Film: An Odyssey, which promises "to tell the history of cinema through a global lens." Those documentary episodes are only 75 minutes, but alongside them, on Mondays and Tuesdays, TCM is running relevant films — an astonishing line-up of 119 films, plus shorts, from 29 countries.

A quick look at the exhaustive schedule shows many, many rare and unsual films, in addition to some familiar classics, that no discerning cinephile should miss.

Week 1 begins Mon., Sept. 2, and covers 1895-1918. It includes some of the very first films made, such as shorts from Edison, as well as influential full-length features, including four from D.W. Griffiths. Following episodes cover everything from European silents, early Asian cinema, the establishment of genre films under the studio system, the rise of world cinema after World War II, French New Wave, spaghetti Westerns, Third World cinema, the rise of "new American cinema" and "radical cinema" in the 1970s, and right up through today's concerns (digital filmmaking, post-9/11 cinema).

Some of the greatest films ever made that you may never have seen will be broadcast: The full schedule is here. I'm not sure it's humanely possible to actually watch every single film (they run into the wee hours on Mondays and Tuesdays), but if you did, you would know a LOT about cinema — and have fun learning.

Art in the Public Sphere

A building on Liberty Avenue near the Bloomfield Bridge has been spruced up with the addition of a framed painting.

It's untitled — let's call it "Still Life With Drone" — but it has been signed by "Fraud."

Pittsburgh City Paper was on-site at The 16th Annual Shadyside Arts Festival on August 24th.The Art Festival on Walnut Street, which started out as a neighborhood street fair, is now regarded as one of the top shows in Pittsburgh. 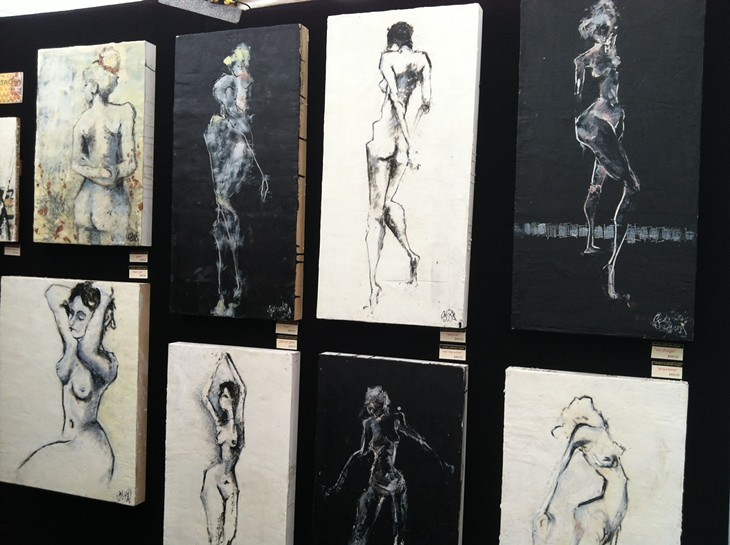 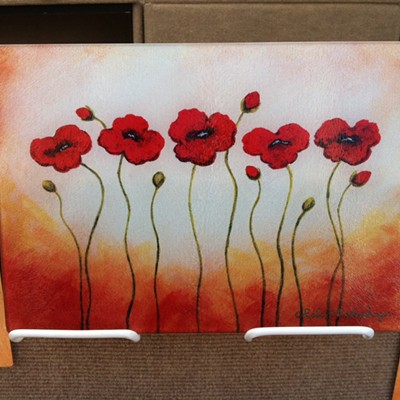 Gullifty's, the landmark Squirrel Hill restaurant whose desserts have brought it fame all around town -- and in our annual "Best of" readers poll -- is closing. Tomorrow.

"We really put a lot of effort and heart and soul into this, for 31 years" says Mark Hastie, who co-owns Gullifty's with his brother, Matt. "There's always mixed feelings. We've had a good run of it and decided to pursue other options."

Prompting the move is the Hasties' decision to sell their Murray Avenue building, a former moviehouse called the Guild, to the Friendship Circle. Hastie says the plan is to open a childcare facility in the location, while he and his brother focus on a catering venture which serves Carnegie Mellon University. There are no plans to open a new Gullifty's in town, he says.

As for the desserts which made Gullifty's famous? "I have been talking with another local bakery about reproducing our desserts," Hastie says. "But I can't tell you anything definitely yet."

Gullifty's posted signs announcing its imminent closure last weekend, but Hastie acknowledges the news will come as a surprise to some of the faithful. "Word has been kind of trickling out. We thought about how we were going to announce it, but the [sales] negotiations didn't allow us to close until too recently for us to plan any kind of big event."

There was once a string of Gullifty's concept restaurants owned across Pennsylvania, including a second Pittsburgh-area location in Whitehall. That location opened in 1980 but closed in 1989; the Squirrel Hill location opened in 1982, and the Hastie brothers purchased it in 1989. There is still a Gullifty's operation in Phliadelphia and in Harrisburg, but Hastie says you shouldn't jump in the car expecting to find the same desserts in either location. The restaurants are separately owned and "Everyone has put their own spin on things. I'd have to say that no one does desserts like we do."

And the Pittsburgh location has a special claim as well: The restaurants take their name from another local tradition: the Mr. Rogers' Neighborhood children's show. "The character X the Owl, when he sees something he likes, Hastie says, 'Isn't that nifty-gullifty?'" Hastie says. "Fred Rogers and his wife were regular customers here."

Editor's note: This post was changed to clarify the identity of the Gullifty's building purchasers.

The City of Play Festival is back, with a new line-up of what it bills as “the best new games in the world.” 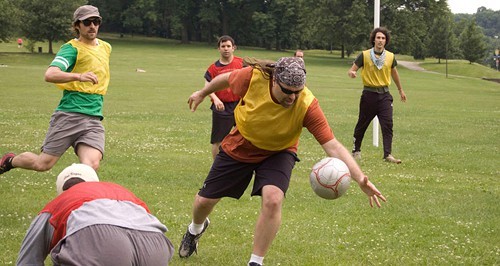 The festival, which includes games for people of all ages, runs all day out of Downtown’s Arcade Comedy Theater (though you can stay as long or as briefly as you’d like).

It’s run by the folks behind Obscure Games, and follows the first City of Play fest, held back in October.

Last week in our Local Beat column, I told you about the singer-songwriter competition going on in Lawrenceville for the past couple of months. Last night was the finals, and here are the results: 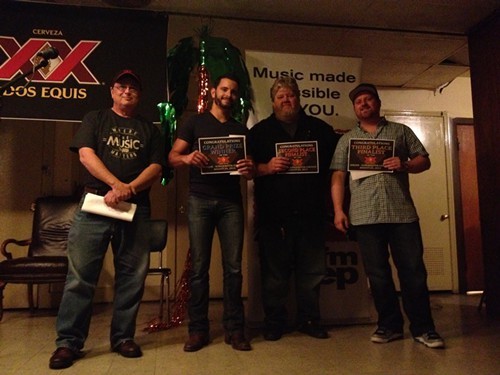 Congrats to the winners!

Public invited to chime in on state transportation priorities

The state is seeking public input on transportation priorities as part of a regular update to its blueprint for projects.

Residents interested in participating can take an online survey at the State Transportation Commission's website, where they can also register for the commission's first interactive online public meeting.

The input collection is part of a regular update to the state's 12-year Transportation Program, which is a cooperative effort among the State Transportation Commission (STC), PennDOT and 23 regional planning partners.

“These new ways to involve the public in our planning process replace our old method of using in-person public meetings and written testimony,” PennDOT Secretary and STC Chairman Barry J. Schoch said in a press release issued today. “Our modernized process makes it easier for the public to share their priorities and concerns with us, which gives us a more complete picture of transportation needs as we update our program.”

The online public meeting will be held from 6-7 p.m.,Thurs., Sept. 26. Schoch will discuss transportation issues and answer questions from registered participants during the webcast. Questions may be submitted in advance to ra-penndotstc@pa.gov.

Public feedback is being collected through Oct. 7 via the online survey; emailing ra-penndotstc@pa.gov to request a printed survey copy; or via telephone at 1-855-896-4930.