Tomorrow, in Millvale Riverfront Park, spectators will gather on a set of bleachers facing the Allegheny River to witness The Baiji’s Last Swim.

The performance work was originally scheduled for June, but canceled due to rain. Local artist Jennifer Nagle Myers created this piece to imagine the last swim of the extinct Chinese river dolphin and honor its 20-million-year existence. The Chinese river dolphin, or Baiji, was declared functionally extinct in 2006, the victim of pollution, hunting and habitat loss.

The show starts at 8:30 p.m. The Drift, a floating art platform folks might recall from the Three Rivers Arts Festival, will provide a stage for Mimi Jong, who will play the ehru, a Chinese two-stringed violin. Stacey Kranick, equipped with a light, will perform in the river around the stage.

If the weather interferes again tomorrow, the performance will take place at 8:30 p.m. Sun., July 21.

Check this Facebook page for the status of the free show, or see punkypip.com.

Baiji's Last Swim is the second in a series of free public performances the artist calls Pittsburgh Public Actions 2013. Her next public action is scheduled for September. 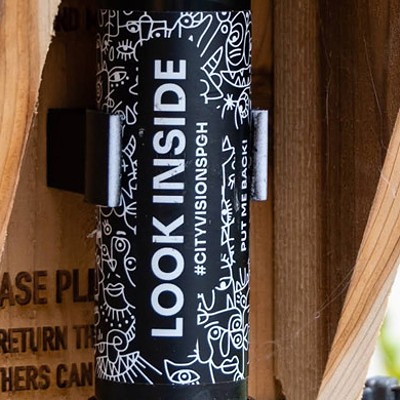 A chili cook-off, skull mugs, and other Pittsburgh food news