The Supreme Court of the United States ruled that the Defense of Marriage Act is unconstitutional, meaning same-sex couples legally married should get the same federal benefits as heterosexual couples.

You can find the ruling in the United States v. Windsor here.

The Court essentially did not rule on Proposition 8, which, as the Post-Gazette notes, clears the way for the resumption of same-sex marriage in California. More explanation on Prop 8 here from the Washington Post.

Parts of Liberty Avenue were shut down for a screening of the rulings for an event, called Riot or Rejoice, sponsored by a host of LGBT and allied organizations. As the rulings became public, the crowd erupted, waving rainbow flags, hugging. The sound man for the event wept. Couples stood, head to head, taking it all in. And local electeds took the stage to rally the crowd, in support of the decision, and the work left do in Pennsylvania to pass a state-wide nondiscrimination law.

"The Supreme Court of the United States told you something you already knew," said Democratic mayoral nominee Bill Peduto. "No one can take away your rights."

There will be lots of analysis on what this all means in the next hours, days and months and we'll provide as much as we can as it becomes available. Here's some early analysis from moderate think-tank Third Way.

"This is the biggest moment in LGBT history since Stonewall," says Jim Shepphard, president of the Steel City Stonewall Democrats.

For couples like Brent Kelly and Doug Palencia, of the North Hills, it was an opportunity for recognition — even if it was something their home state of Pennsylvania has yet to pursue. The pair have been together for 12 years, and won't get married out of state. Instead, they want to wait until Pennsylvania approves it.

In a press release issued after the ruling, EqualityPA executive director Ted Martin noted there is much left to do in Pennsylvania.

"In the coming hours and days, we'll be working with legal experts to analyze today's rulings and determine what impact, if any, they could have here in Pennsylvania," he wrote. "But at this point, even with the death of DOMA and Prop8, same-sex couples in the commonwealth are not able to marry.

Despite these favorable rulings, we still have work to do to win marriage here in the Keystone State."

We'll have more soon. But I want to leave you with this image, because to me, it sums up the weight that these decisions held for people. 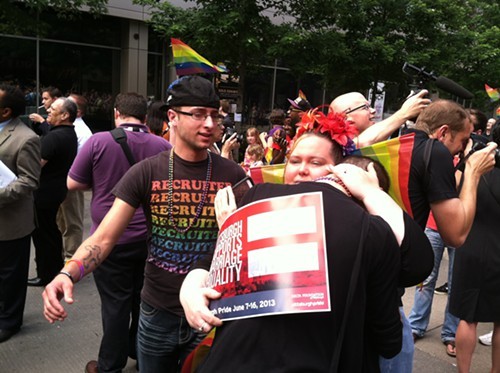 DC's The Evens stop by the Union Project