Last Week for The Kreutzer Sonata

Marty Giles gives a terrific performance of this script for one, Nancy Harris’ wrenching one-act adaption of the Tolstoy novella, at Pittsburgh Irish & Classical Theatre.

The lone, upper-class character’s monologue is about his relationship with his wife, from their charming courtship through the affair she has with a childhood friend of her husband’s, and the tragic denouement. 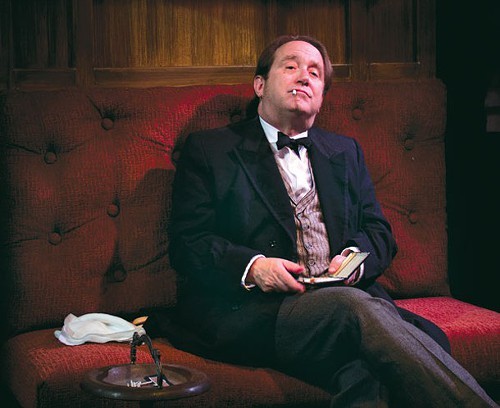 The play's historical context puts us at some distance from the character and his mores: It’s set more than a century ago, in Europe, when a man even visiting a married woman was scandalous. But it’s a world familiar enough (mostly from other fiction) to sink into, especially given the psychological acuity of the script. (Here’s Michelle Pilecki’s formal review for CP.)

Giles’ character is, by design, not admirable, or even terribly likable; his understanding of women is deeply sexist by modern standards. But he’s very real, even wondering to what degree he’s responsible for actively arranging the liaison between his wife and her lover.

My only complaint is the production's video component: I didn’t want to see what the wife or her lover looked like, because imagination is more powerful. And the moving-image projections distracted the audience from Giles himself, who was busily adding to his legacy as one of Pittsburgh’s main theatrical talents of the past two decades-plus.

Still, this is a show worth catching. It has five more performances through this Saturday, starting with tonight’s. Tickets are $25-48.

Lauren Byrne: "I haven't talked to anyone, and all of the sudden I was running"