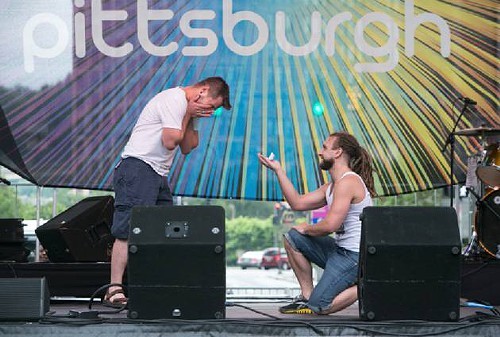 Watching Maddy Landi on Sunday, as he surprise-proposed to Matt Bartko on stage in front of hundreds of PrideFest attendees on Liberty Avenue, you’d have thought Landi had his mind made up long ago. But while the couple has been together for six years, Landi (pictured above, on one knee) says that it’s only in the past few months that he actually decided he wanted to get married.

Landi runs kNOTDance, a locally based contemporary troupe known for its aerial work. (Think trapeze, only with big swaths of cloth.) The athletic company is popular at festivals and a particular favorite at LGBT street fair PrideFest, where it performs every year.

As he often does, Bartko, 30, was videotaping the troupe’s performance for Landi. “At one point the music changes and he pulled me over and pulled the camera off me and got down on one knee, and I knew what was going on,” says Bartko. “It was a huge shock and a wonderful surprise.”

Landi presented the ring to the prerecorded strains of the song “Grow Old With You,” from the Adam Sandler flick The Wedding Singer. “I chose that song specifically because for the past six-and-a-half years, I’ve not wanted to get married,” said Landi. “The banter [with Bartko] was, ‘I want to grow old with you.’”

Yep — the kNOTDance guy still wasn’t into formally tying the knot. But Landi had had a change of heart while recently touring Germany with acclaimed dance troupe Pilobolus.

“Being on tour sort of solidified my feeling of wanting to be with Matt for the rest of my life,” said Landi, 26, in a phone interview yesterday. For one thing, two other couples in that touring company were planning their nups. And it didn’t hurt that marriage equality was this year’s PrideFest theme, as evidenced by all those T-shirts reading “I Wanna Marry You.”

“A lot of people were happy that I shared that moment with them,” says Landi.

Landi’s family is from Pittsburgh, though he grew up in Miami, and returned to study dance at Point Park University. Bartko, a McKeesport native, works at Pitt, where he’s studying for his master’s in social work.

The two met online in 2007, in a chatroom, then attended a Pittsburgh International Lesbian & Gay Film Festival screening together. The next time they saw each other was shortly after that, when Landi unwittingly cut off Bartko in traffic. Following the script of an admittedly meet-cute scenario, Bartko tailed him, and cheerfully said, “You cut me off, asshole.” Then, as Bartko puts it, “We didn’t leave each other’s side for the next two or three weeks.”

With Landi touring so much, though, they’ve gotten used to being apart. In fact, on July 6, just six weeks home after concluding the German tour — and three weeks after proposing — he’s leaving for nine-month world tour with Pilobolus.

And if the proposal was simply Landi’s way of locking up Bartko before hitting the road, it worked: Bartko promises he “won’t be sitting under the apple tree” with anyone else.

Toni Braxton, Walk The Moon to perform at Pittsburgh Pride 2019