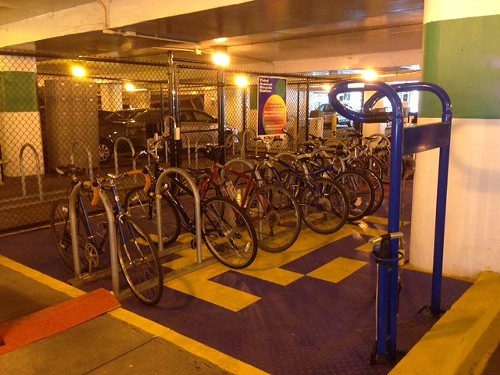 For a few months now, cyclists have been able to park their bicycles at the Third Avenue Bike Station — a transformed space in the Pittsburgh Parking Authority's Third Avenue Garage. That area offers a fix-it space and parking for 30 bikes.

And starting July, a "premium" parking area — a fenced in section accessible only by a badge that opens a magnetic door — will be available for cyclists who want to lease an area with secure, weather-protected storage lockers and parking for 24 bicycles.

“Providing cyclists with safe, secure parking for their bikes is another step forward in making Pittsburgh a world-class, bike-friendly city,” Mayor Luke Ravenstahl said in a press release announcing the station. “Project Pop Up: Downtown has made great strides in increasing Downtown’s vibrancy and bringing more people into the heart of our city. This collaborative project will make shopping, dining and entertainment amenities more accessible to cyclists as we continue to make Pittsburgh an even more livable city for everyone.”

The bike station was led by the city's cycling advocate group, BikePGH, with a $10,000 grant from the city's Project Pop Up: Downtown program, $7,200 from the Pittsburgh Parking Authority, and the donation of parts and labor by the PSX Group, one a Parking Authority contractor, worth $4,200.

Love your Block applications due Friday

Pittsburgh remains one of the country's most walked cities, says report