The lonely robot at Downtown's Robot Repair Shop is planning an escape.

The shop, at 210 Sixth St., opened in 2011 as part of Mayor Ravenstahl’s Project Pop Up: Downtown, which brought a number of small businesses and public-art spaces to Downtown in an effort to make the area “pop.” Its last day is Monday.

Artist Toby Fraley's project in particular has garnered a substantial amount of attention. Passer-bys stop to snap cell-phone photos of the quirky art project. Inside, the shop feels like what the year 2013 might look like in an alternate universe. Sixties-style representations of advanced technology litter the walls of the modestly sized storefront where, at the center, the lonely robot is busy with a shovel, planning his escape.

Project Pop Up’s goal was in many ways achieved: The landscape on Sixth Street is a flurry of activity, crowded restaurants bookend the repair shop’s storefront on the Downtown Street overlooking the water, and the area’s foot traffic is markedly increased.

Fraley says the street’s revitalization is a double-edged sword: It’s a net positive for the city, but it drives out projects like his shop, which closes its doors on May 6.

Fraley is grateful for the time that the shop had: The initial Project Pop Up grant was supposed to run out after a year, but public reception and the landlord’s appreciation for the shop kept the doors open an extra six months.

“Some people think it’s a real shop and they come in and I wonder like, ‘Do you have a robot?’ And then there is another set of people who really just appreciate the art behind it,” Fraley says.

The lonely robot inside the shop will eventually dig his way out and into the street. Even after the doors are closed and the neighboring restaurant moves into the space, Fraley hopes his little robot shop would have left an impact on the city at large. 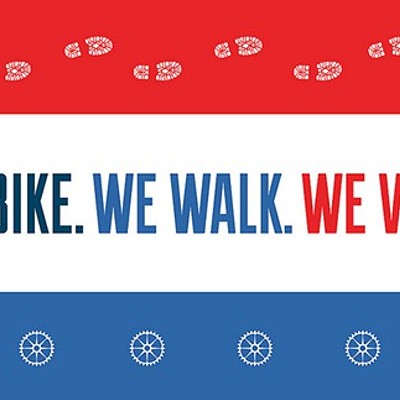