Hazelwood native Chevy Woods has been touring the world with Wiz Khalifa and their Taylor Gang conglomerate. This Friday, April 26, Pittsburgh can catch him live in concert as he returns home for an all ages show at Club Zoo. Also performing will be fellow Taylor Gang rapper Quay Meanz and Rostrum Records' latest signee Boaz. 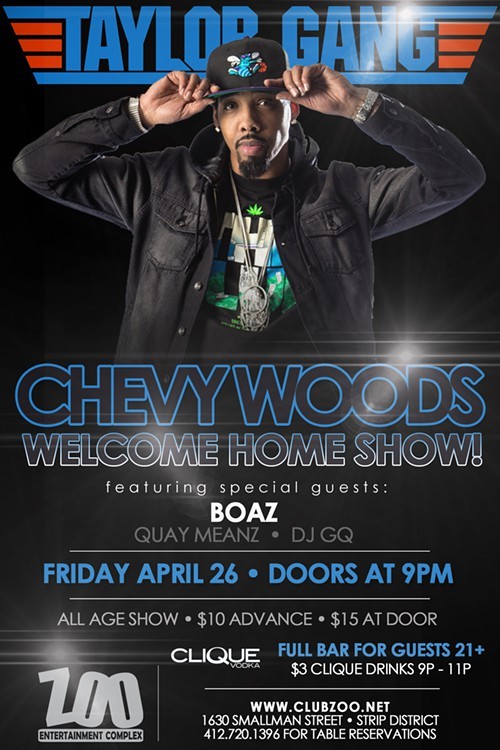 Woods and Boaz share a particularly lengthy history working together. In 2007, Boaz's group The Govament unleashed their Election Day mixtape that sent ripples throughout the streets of the city. The group that hailed from Larimer featured Woods heavily on the project. Half a decade later, Woods and Boaz toured together on the first Under the Influence of Music Tour, which also featured Pittsburghers Wiz Khalifa and Mac Miller. In the midst of the tour, Fuse TV sat down at the table with Woods and Boaz together to discuss the 'hard-knocks Pittsburgh rap scene.'

Woods has been active in recent months, featuring on songs by up-n-coming Pittsburgh rap acts Hardo and Crystal Seth. Following up on his Gangland mixtape from June 2012, Woods is preparing for the release of Gangland 2, which will be hosted by popular street rap personality DJ Drama. Woods has already released several music videos from this upcoming project, the latest, "M'fer," features Wiz Khalifa.

One of my personal favorite songs of Woods' is set to be released on Gangland 2 as well. "Things Change" finds Woods reflecting on his humble beginnings to his current success as an artist in the music business.

“Sex, Violence and the Human Body” at the History Center

The mayoral race: a black perspective