Employees at the Rivers Casino who are attempting to unionize 800 of the casino's 1,800 workers filed charges this week with the National Labor Relations Board alleging a coordinated campaign by management to intimidate them.

The employees, known as the Steel City Casino Workers' Council and represented by UNITE HERE Local 57, filed 38 separate complaints with the NLRB alleging surveillance of employees in hallways and in rooms designated for breaks, discriminatory enforcement of workplace policies against those who are promoting the union effort, threatening and unlawful comments, and in a few instances, prohibitions by management against speaking about the union.

The Council launched its campaign to organize publicly last Thursday, carrying a large sheet cake announcing the effort into the employee dining room. Since then, according to a prepared statement released by UNITE HERE Local 57, "workers report intimidation tactics including managers swarming, hovering and interrupting workers in the employee cafeteria" and "casino security agents posted in areas where they were not posted before."

Posters urging casino employees to not sign the unions' cards have also appeared, according to union organizers.

A photo taken of one of the posters that was shared with the City Paper, (see below) urges the workers to "keep their hard earned money" and lists the monthly dues of four unions supporting the workers — UNITE HERE Local 57, the Teamsters Local 211, the Operating Engineers Local and the United Steelworkers of America. It also details the unions' membership numbers and notes that union membership is plunging across the country.

"The facts about the unions behind the Steel City Casino Workers Council, who appear to be calling the shots, do not paint a pretty picture," the poster reads.

Bob Chester, NLRB regional director of the Pittsburgh office, says casino management has not yet been sent a copy of the complaints. That will happen in the next few days, he says, followed by interviews with the workers and a review of the evidence behind the allegations.

"Once we have a better idea of the evidence against them, we'll contact the employer" for its side of the story, Chester says.

A spokeswoman for Rivers Casino did not immediately respond to a request for comment. We'll update this post as soon as she does respond.

In a statement released after the launch of the organizing effort last week, management noted that "so far, the majority of our employees have consistently chosen to remain independent. That is their choice and their right."

This is not the first time the casino's management has faced the NLRB. The NLRB ruled in 2011 that the casino's parent company, the Holdings Acquisition Co., violated fair labor practices by restricting employees' right to engage in union activity at the workplace, surveilling union activity and granting a benefit to employees on the day of the election (an extra break for only one shift of workers to vote), after security workers attempted to unionize shortly after the casino opened in 2009.

Rivers Casino management also made a headline in the Post-Gazette today, after they announced that they would not extend or renew three-year community funding agreements that have expired. The $3 million in community funding, offered as part of the competitive bid process for the license to operate the casino, was divided between the Northside Leadership Conference and the Hill District. 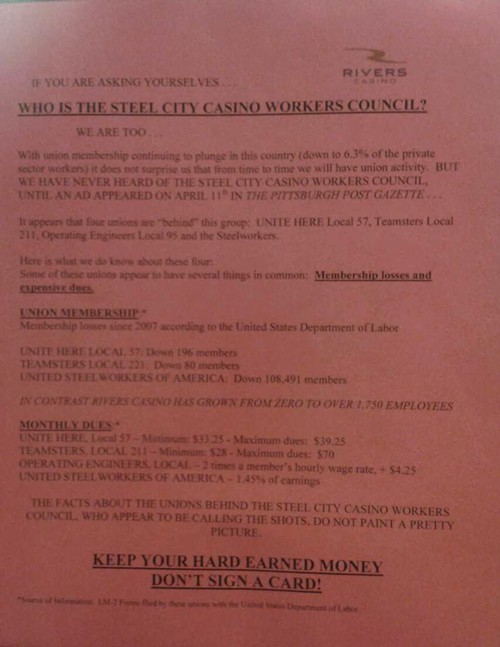