You can hardly discuss The Beatles without noting their collective sense of humor, but as far as I know, until now no one’s written a book about it. And if someone did, it couldn’t have been as lushly and cleverly illustrated as The Beatles Were Fab (and They Were Funny).

The oversized hardback, by Kathleen Krull and Paul Brewer, with illustrations by Stacy Innerst, is new from Houghton Mifflin Harcourt. Innerst is best known around here as a veteran illustrator for the Pittsburgh Post-Gazette (though on the book’s jacket, he notes that had his boyhood wish come true, he’d now be Ringo).

Here's his double-page spread depicting the four trying to name the band: 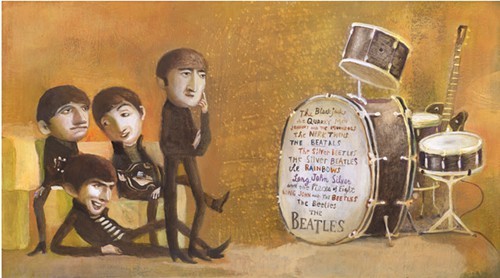 The book breezily traces John, Paul, George and Ringo from their youth in Liverpool to the late ’60s. But it focuses on those heady years between “Please Please Me” hitting No. 1 in the U.K. and the band's last real live show, at Candlestick Park. Those were the days when the boys teased the press with aplomb in exchanges like this one: “Q: What do you call your hairstyle? George: Arthur.”

In a world where pop stars were still rarely heard offstage, The Beatles’ carefree cheek paved the way for more radical dealings with the press — like Dylan’s, a couple years later — not to mention their own increasingly outspoken politics. (Though none of that, of course, figures in a kids’ book.)

While Fab comes complete with a bibliography, rest assured, parents, that this is a cleaned-up telling focusing on the lads’ light-hearted side — the public giddiness of Beatlemania being the touchstone.

Throughout, Innerst’s richly illustrations capture the band with just a loving touch of caricature and spot-on gestures. (Though it might have been fun to see what he could do with Sgt. Pepper’s silliness and maybe even a bit of psychedelia.)

If you remade A Hard Days’ Night as a children’s book — and in color — it would look a lot like The Beatles Were Fab.

Tags: The Beatles Were Fab (And They Were Funny) , Stacey Innerst , Program Notes , Image