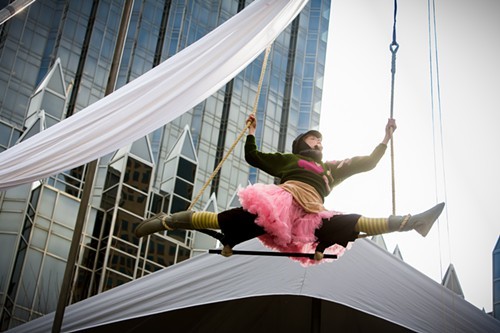 The four-person cast tells the kid-friendly story of a little girl’s birthday party that gets messed up by a mischief-maker but redeemed by the sort of home-made fun you can have if mom and dad have a sense of humor … and some circus skills.

Sota (as the dad) does some nice juggling and other tricks; Erin Carey some fine trapeze work (that’s her pictured, and bundled up); and Becca Bernard (as the birthday girl) and Bob Shryock contribute clowning and other talents, plus audience—participation hijinks. Cream pies are also involved.

The half-hour show had it first performance at noon today. I caught the 5 p.m. performance; the audience was just a couple dozen but appreciative (even if the applause was somewhat muffled by mittens).

“Cake” is on courtesy of the Pittsburgh Downtown Partnership. There are six more performances, at noon, 5 p.m. and 8 p.m. tomorrow, and 2, 5 and 8 p.m. on Sunday.